Visiting my grandparents at Christmas

Even in summertime, I never remember to take flowers. And today, even if I had been the sort to arrive with a bunch of red carnations, I wouldn’t have been able to do so, every single business in Langport was closed.

Pulling into the car park at Huish Episcopi, I read the parish council noticeboard before crossing the road to the church. A car had been pulled up close to the lytch gate and an elderly man was being helped out. There was winter growth on the churchyard grass, enough to ensure that frosts would leave no brown patches.

My grandparents’ grave lies near the far wall of the yard. Someone once told me that there was once a superstition that one did not bury on the north side of a church, it was said to be the dark side. There were examples I could remember of empty north sides in rural Ireland, but none in our corner of rural England, Nan and Grandad lie in the far north of the churchyard.

I go and talk to them. Grandad died in 1991, but I can still hear the soft tones of his voice. I buried Nan myself in 2007, a diminutive woman of massive obstinacy and huge determination.

Visiting them on Christmas Day recalls Christmases fifty years ago. The chief fascination for a boy going into their farmhouse was the golden bell that hung above the drawing room window each Christmas. It was a musical box. Pull the clapper and it came out of the bell on a string; release it and the string slowly retracted to the notes of Jingle Bells. The farmhouse was always decorated with twisted crepe paper streamers that were pinned at the centre and corners of the low ceilings, and those multi-coloured paper balls that were concertinaed into flat semi-circles when they were put away, but when hanging up were bright reds and blues and yellows.

There would undoubtedly have been large amounts of food, it was always a house where visitors were fed abundantly, but Nan was particular about eating habits. In her younger days she had been in service at the home of a local army officer and would insist that the dining room at the back of the house was the place for eating. On a sideboard in the room at the front of the house, there would have been boxes of chocolates and a large tin of Quality Street. It was the latter that caught the eye of a boy, being invited to dip a hand into the tin was a serious affair; it was too easy to make the wrong choice and get a disappointing soft centre.

If I were to bring flowers to their grave, they would not be red, but they would be the golds and blues and purples and greens of the sweet wrappers; a gesture of thanks for all of those boyhood moments. 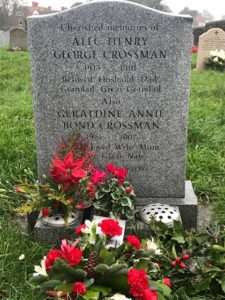