Walking through the riverside park in Langport, a boat lies on the bank beside the backwater. Only in recent years have boats been seen again on the River Parrett, and the boat at the catchwater is undoubtedly more for decoration than navigation. In the pale sun of a midwinter day, it brought memories of the long hot summer and of the busyness of the ancient town. Perhaps it also spoke of former times in the town, of stories told in my childhood of a great grandfather who would take a horse-drawn barge down to Bridgwater and come back up river with goods from the town.

Taking a picture, it seemed appropriate to switch it to monochrome, to try to evoke times when the occasional flat-bottomed boat would have travelled up and down the unremarkable waters that cross the Levels on their way to the sea. Of course, the image was too sharp and the boat too well kept for the picture to appear as anything other than recent, but there was a strangeness in seeing the image in black and white. There was an evocation of moments from childhood that are remembered in colour, but appear only as monochrome images among family snaps.

The first colour photograph among my parents’ family albums is from 28th August 1972. There is no date written on the back, but the date is not hard to verify. We had visited a country park in Gloucestershire and the news on the car radio had announced the death of Prince William of Gloucester in an air crash.  News of the death had seemed to cast a cloud over the afternoon, as if it seemed improper to enjoy ourselves when such a tragedy had occurred.

Perhaps it was a matter of cost, but not only are the photographs that date from the years before 1972 in black and white, but they are mostly only a couple of inches square. Perhaps the Kodak camera used to take the pictures only used film that produced prints of a certain size; perhaps it would have been much more expensive to have larger prints; perhaps the definition would have been fuzzy if there had been an attempt to enlarge them.

Accustomed to using a digital camera or a smartphone, it is hard now to imagine how sparingly a camera might have been used in childhood years, holidays and special occasions were the only times that merited expenditure on film and printing. Random pictures of a boat on a river bank would probably have been thought frivolous, and would not have merited the expense of being printed in colour, or in black and white. 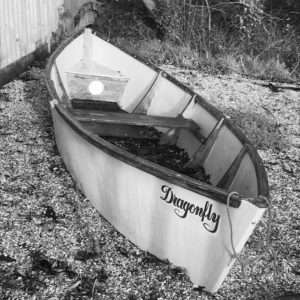