Lifting the milk bottles from the crate, there was a sense of something not right, a sense of there being something missing. It was the foil tops. In former times, at Christmas, the milk bottle tops would have been decorative. The tops would have been printed with green holly leaves and red berries. The special tops lasted only a few days, but helped accentuate the sense of it being a special time of the year.

Milk bottle tops were memorable because we collected them. Tin foil was collected for charity. The milk bottle tops would be taken to school where they would be added to others brought by the forty pupils at our school and then they would be sent somewhere. No-one ever time explained to us why we collected the tops; we were given no clue as to the use to which they were put. Once the Blue Peter Christmas appeal was for bottle tops and foil: they were collecting for an ambulance for somewhere in Africa. Enough foil was sent to provide four ambulances. People must have drunk a lot of milk that Christmas. Perhaps somewhere there was someone with a great mountain of bottle tops.

It wasn’t just the bottle tops that assumed a festive air. The BBC had a picture of a turning world that appeared on the television screen when continuity announcements were being made. For a few days, over Christmas, it would be replaced by something seasonal. Similarly, the weather map would have a decorative sprig of holly depicted in the corner.

The festive adornments didn’t always last until the New Year, which wasn’t a holiday in England until 1974. New Year seemed something for those from North of the border who did not like Christmas, and it had nothing to do with holly and ivy and the things of which we sang in our carols. Someone at the BBC, and at the Milk Marketing Board, and at the other bodies who marked the season, must have decided each year that the time for jollity was over and that normal service would be resumed.

There used to be a moment of sadness on the morning when the ordinary gold and silver tops reappeared at the door. The change of milk bottle tops would coincide with the last chocolate from the selection box having been eaten (invariably, the last would be the least favourite). People would be returning to work and routines would be re-established. It was all over for another year, though what it was that was over was never clear. 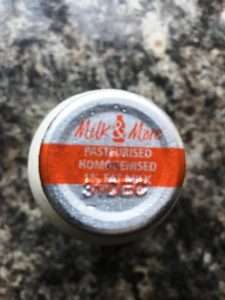