Some people should never be 77

There was a barbecue at my cousin’s house in Pitney last Friday, followed by disco music for the gathering of cousins.

Dancing to Blondie’s Atomic, one of my cousins said how much she loved Debbie Harry.

Unbeknown to us, Friday was actually Debbie Harry’s birthday, her 77th birthday. This seems to run contrary to the natural order of things. In Star Wars terms, Debbie Harry being 77 is like a disturbance in the Force. Debbie Harry should always be young.

When I was in ministry, I used to think that clergy should always be in their late 60s and worldly wise, grey and lined, carrying the marks and the bruises of four decades of work, and even if they’re not, they should think they are. Whereas pop stars should be at the other end of the age range, they should never be more than 35, or perhaps 40, if the more mature image suits.

I am troubled sometimes when I meet someone from twenty or thirty years ago, I don’t mind that I have got much older and have gone grey, but I expect them to be as they were when I last saw them. It is a reassurance that some among my cousins show no more sign of ageing than did Dorian Grey.

The expectation that people should not change is strange, perhaps a projection of my own fears of ageing and death on to others, but it raises thoughts in my head about whether our pasts are lost forever.

In my rather vague theological thinking that has endured in the years since I resigned from the church, I have clung onto the idea the redemption of creation that is described by Saint Paul in the Bible in his Letter to the Romans.  If such a redemption takes place, I hope, it will include the redemption of time, allowing us to recapture the moments that are important, allowing us, perhaps, to put right the mistakes of the past (and I have many, many mistakes I would like to rectify).

I am aware these thoughts are very unorthodox. But should I ever find myself in that state of existence known as heaven, I think I would probably be happy with being maybe 68, the age at which I might get a pension.

Ms Harry, if I should happen to meet her, would be no more than half of my age, and my cousins would remain as young as they are now. 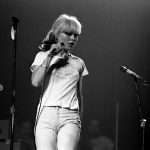