Researching my forebears on Ancestry, I discovered the sad story of the death of Thomas Crossman, my great great grandfather.  In the Western Gazette of Friday, 18th April 1884, the report appeared.

MELANCHOLY ACCIDENT: On Monday afternoon, a fatal accident happened to Mr Thomas Crossman, a small farmer of Pibsbury. He was found in the road near Pibsbury Corner by a young man named Scott, severely injured, and he died after his removal to his home.

The inquest on the body was held on Tuesday morning at Mr William Slade’s public house, before Mr W.W. Munckton and a jury of whom Mr John Kiddle was foreman.

The following evidence was taken:-

Christopher Willey said he was cracking stones on Monday afternoon on the turnpike road near Wagg Drove. Deceased came by with two horses “tandem” in a putt, and was riding on the corner of the near-side of the putt. He asked deceased for a nail, which he gave him. The horses were going quietly.

Thomas Scott said he lived in a cottage near Wagg Drove. Was at dinner, and, hearing a noise, he ran across Mr Kelway’s field into the turnpike road, and first picked up a hat. Farther on, near Pibsbury Corner, he found deceased in the road, near the pathway, lying on his left side.

William Crossman, son of deceased, said his father had been ploughing for Mr Stuckey. The horses came home alone about half past three o’clock, and from the appearance of the harness he thought they must have run away.

Dr Johnstone said he was at Huish on Monday afternoon when he was fetched to see deceased. Found him at the place where the accident happened insensible. He had him removed to his home, and remained with him until he died, about ten minutes afterwards. Had examined the body. There were some scratches on the left leg, bruises on the left shoulder, a graze on side of the left eye and left ear and a slight bruise on right side. It was witness’s opinion that in trying to stop the horses, deceased fell down, and wheel went over his neck, causing a fracture of the cervical vertebrae which caused death.

James Scott (recalled) said when he saw deceased passed his house, he thought he was sitting on the shaft and leaning forward, and probably was reaching for the side rein to stop the horses running away.

The Coroner having summed up, a verdict of “Accidental death” was returned.

Deceased, who was 47 years of age, was greatly respected, and his death has cast quite a gloom over the parish. In addition to farming, he was employed by Messrs Bradford and Son as a haulier. He was also one of the ringers at St Mary’s Church. 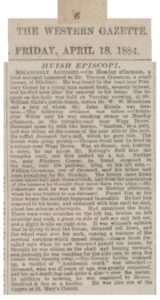