An Englishman on the Twelfth

I have clear memories of this evening twenty-seven years ago.

It was the evening of the Twelfth of July of 1994. There were tired feet and sunburned foreheads and heads aching from being overdressed and dehydrated on a hot summer’s day: the three Orangemen sat and watched the video recording I had made of the proceedings of the day.

They had met at their hall before coming into the town and had walked through deserted streets to the departure point. Sunday suits and rolled umbrellas and bright orange collarettes. One of them still adhered to the tradition of wearing a bowler hat. The “hard hat” he called it and I think there was as much common sense as tradition in the wearing of it: he was red haired and very thin on top!

The lodges from a radius of maybe fifteen miles gathered in a small country town where they would march to the Field. The banners depicted stern Old Testament scenes and Protestant figures from times past who would have admonished those who partook of beer and played pop music and went to the shops on the Sundays.

The lodge walked between high hedges as it approached the Field, the local undertaker appeared from a side road, hastily unrolling his collarette and falling into step. It would have been bad for business for him to have walked with the lodge in the home town – his surname was without an “O” prefix when dealing with Protestant clients, but had the “O” if his customers were Roman Catholic.

By the time the Field was reached there was about an hour to spare to find food and drink and chat with friends before it was time to form up again. The speeches were fine for those who wanted to listen, but the real business of the day was about being with friends.

The hour passed and it was time to reverse the morning process. The sky was blue and everyone was fed and refreshed and it had been altogether a fine day.

These were men whose organization had been compared to the Ku Klux Klan; whose beliefs have been vilified and pilloried around the world. Being a Somerset-born, pint-drinking, football-following, middle of the road Anglican in those days, perhaps my senses were too dull to see what evil company I was keeping. All I could see were three men whose activities (that I thought were eccentric) had been seen by few and had caused no offence to anybody and who the next day would be back working on the land.

My attempts to explain such a day baffle most of those to whom I speak. 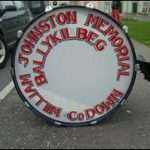