It’s been too long

The rhyme printed on the cardboard seal has little by way of poetic quality and much by way of the evocation of ordinary, everyday life taken away by the government.

Banal and trite it may be, but it would convey the mood of countless thousands of people. The chance to just sit with a friend, at a fireside, at a kitchen table, on a garden bench, would be a chance to recapture dear moments.

It’s been too long and those who stand in Downing Street for the evening briefings have no conception of what life is like for countless people who live lives of imposed isolation.

“Of course,” they would say, “we must have distancing,” but would they explain why people may walk the aisles of the non-essential goods sold by The Range, and W.H. Smith and Marks and Spencer, but those same people cannot be permitted to sit in the fresh air of someone’s garden? It is rank hypocrisy for the government to say that people may gather for the purpose of private profit but may not do so for the sake of ordinary human kindness.

Spending more than thirty years in parish ministry, I could point at having acquired no special skills nor particular attainments, what I did know about was drinking tea with older people. I drank countless thousands of cups of tea with older people. I learned how important it was to sit with a cup or a mug in hand and just be there. Sometimes, it wasn’t even necessary to say anything. Sometimes, we could just sit and stare into the fire. Just to have another human being with them had an importance no politician could imagine.

It’s been too long. 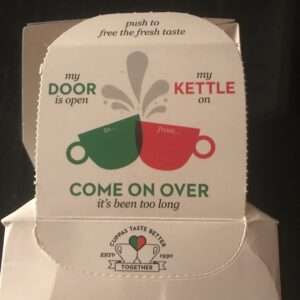