The naming of streets

To lift the mood of lockdown, I promised myself that during this month of March I would re-read In Pursuit of Spring. It is Edward Thomas’ account of a bicycle ride from London to Somerset in March 1913. Riding westward to  meet the signs of springtime in those days when the season arrived much later than it does a century later.

Thomas left the capital on the morning of Good Friday, 21st March 1913. At Garratt Green in south-west London, he notes:

As I left the Green I noticed Huntspill Road. Why is it Huntspill Road? I thought at once of Huntspill in Somerset. of Highbridge on the Brue, of Brent Knoll, of Burnham and Hunt’s Pond, and the sandhills and the clouded-yellow butterflies that shared the hollows of the sandhills with me in the Summer once. Such is the way of street names, particularly in London suburbs, where free play is given to memory and fancy.

A century later, motorists travelling through Somerset would be familiar with the name “Huntspill” because of a sign on the M5 motorway through Somerset that announces the presence of the Huntspill River, close to where it passes Brent Knoll. Many would know Highbridge and Burnham on Sea, and it would not be necessary to travel near the coast to be familiar with the Brue, which runs between Glastonbury and Street. But in 1913, small settlements and smaller rivers in Somerset would have been unknown to most people in south-west London, as Thomas comments, the naming of streets owed much to memory and fancy.

The propensity for names associated with home to be carried to unfamiliar places sometimes brought an odd sense of reassurance. Moving to Northern Ireland in the early 1980s, there was an area to the east of the Antrim Road that included Somerton Park, Glastonbury Avenue, and Taunton Avenue. Someone from Somerset, or someone who gave free play to memory and fancy, had given names to these roads of leafy suburbia: someone connected to home had been here. Someone who knew a county and a landscape and towns and a people different from Belfast in the Troubles had given names to these places. Moving to Dublin at the end of the Nineties, it was a surprise to encounter a development simply named Somerton off Rochestown Avenue in Dun Laoghaire, along with a fine house called Somerton Lodge, someone who knew a small town a few miles distant from home had been here before me.

Names may be arbitrary, their origins obscure, but they amass a complex of associations and memories. A streetname could evoke sandhills and butterflies for Edward Thomas. Perhaps developers in the present times do careful market research into the possible names for streets, certain names would definitely prompt certain reaction, and not all might be as poetic as those evoked by Huntspill Road. 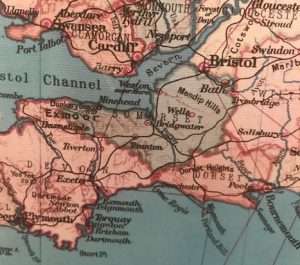