The school humanities club today dealt with the tsunami of 30th January 1607. The waters hit the low-lying Somerset coast with such force that they swept fourteen miles inland, reaching Glastonbury. The Polden Hills became a peninsula and High Ham became an island. A contemporary account suggests a disaster of with devastating consrquences.

“Newes out of Summerset shire

In January last (towards the end of the moneth,) the sea at a flowing water meeting with Land-floudes, strove so violently together, that bearing downe all thinges that were builded to withstand and hinder the force of them, the bankes were eaten through and a rupture made into Somerset-shire. No sooner was this furious invader entred, but he got up hie into the Land, and encountring with the river Severn, they both boild in such pride that many Miles, (to the quantity of xx. in length, and 4 or 5 at least in bredth) were in a short time swalowd up in this torrent. This Inundation began in the morning, & within few houres after, covered the face of ye earth thereabouts (that lay within the distance before named) to the deapth of xi. or xii. foot in some places, in others more. The daunger that this terible tempest brought with it wrought much fear in the harts of all that stood within the reach of it, but the sudden and strange cruelty of it, bred the greater terror and amazement. Men that were going to their labours were compelled (seeing so dreadfull an enemy approching) to flye backe to their houses, yet before they could enter, death stood at the dores ready to receive them. In a short tyme did whole villages stand like Islands (compassed rounde with Waters) and in a more short time were those Islands undiscoverable, and no where to be found. The tops of trees and houses onely appeared (especially there where the Countrey lay lowe,) as if at the beginning of the world townes had been builte in the bottome of the Sea, and that people had plaide the husbandmen under the Waters.

Who would not have thought this had bin a second Deluge! for (at one time these inhabited places were sunke cleane out of sight. Hunsfielde (a Market Towne in the sayde Shire) was quite drowned. Grantham a village utterly over-flowne. Kenhouse another village covered all over. Kingson a thyrd village likewise lies buried in salt Water. So (besides other small cottages standing in vallies) is Brian Downe a Village quite consumed. Adde unto these peopled places, the losse of Marshes, Corne-fieldes, Pastures, Meddowes, and so forth, more then can bee numbred: the misery of it no man can Expresse.

In this civill Warres betweene the Land and the Sea, many Men, women, and Children, lost their lives: to save which, some climbed uppe to the tops of the houses, but the rage of the merciles tide grew so strong, that in many, yea most of the Villages aforenamed, the Foundations of the buildings being washed away, the whole frame fell down, and they dyed in the waters: Others got up into trees, but the trees had their rootes unfastened by the selfe-same destroyer, that disjoynted barnes and houses, and their last refuge was patiently to die.

A lamentable spectacle was it, to beholde whole heards of Cattle, struggling for life with the flouds, Oxen in great numbers were caryed away with the streame, and looked like so many Whales in ye Sea: their bellowing made a noise in the water as if it had bin a tempest, and that the Sea had roared. The flocks of Sheep that are utterly destroied by this Land-wracke are innumerable, none knowes the losse for the present but the owners of them: But the whole land wil I feare feele the smart.” 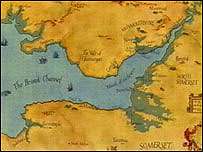