There is a familiarity in the drive from Ilminster to High Ham, even on a winter’s night. The village of Westport is always sleepily quiet. It was intriguing to discover when once reading Bradshaw’s canal guide that a waterway had  carried laden barges from here down to the River Parrett, from where the produce went to Bridgwater and then the sea. The canal is still visible, the hump-backed bridges that cross it are still intact.

Hambridge has many family memories. The village hall was the venue for receptions and parties; caterers providing whatever fare might be required. Ireland seemed a strange place, having wedding receptions at hotels. Charles Marson, the Christian socialist and folk song collector, was vicar of Hambridge for years. I have tried to visit the church a number of times, each time it has been firmly locked. There is no sign or memorial to the famous onetime incumbent.

The main road is reached at Curry Rivel. The fleet of red and white school buses that emanated from the village would bring hundreds of children from the district to the secondary school at Huish Episcopi. The drivers were familiar faces to successive generations of pupils. Of course, they had surnames but to those boarding the buses each day, they were always “Mike,” or “Fred,” or whatever, even the owner and boss of them all was never more than “Jack”.

Langport is our home town. Its single medieval main street would have once provided shops selling everything one could desire, then it fell into decline, until enjoying a great revival in recent years. Langport once had its own bank and in Walter Bagehot, author of The English Constitution, it produced a writer who made a lasting contribution to political life. At the top of the street, a ninety degree bend once passed a television shop. A clear memory from childhood is the first colour televisions appearing in the shop in the late 1960s; vast, bulky boxes the price of which far exceeded the pocket of a working man.

Passing the former premises of Kelway Nurseries brings memories of two summers spent working in the fields there. The company has moved up the road, and is still present at the Chelsea Flower Show each year . Heading toward Somerton, we branch left to join the road that leads to High Ham and to home. Venturing through the gateway at the ninety degree bend on Field road would be to walk on the site of a Roman villa.

All is changed, and yet nothing has changed. Look up into the night sky on a winter’s night, and Orion and The Plough are there- definitely unchanged. 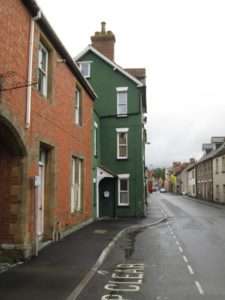