There was a moment of hurt. A local parody website carried a photograph including members of my family. It was labelled, “Autumn Fashion Collection, 1975,” and underneath someone had commented, “ooh, aargh.” My grandfather on whose farm it was taken would have laughed off such thoughts, he had little regard for the outside world and its fashions.

Grandad stands on the left-hand side of the photograph, a broad-shouldered man in flat cap, sleeveless pullover, white shirt, brown trousers and heavy black boots. The nine men with him include my two uncles, it is threshing time and every available hand was needed.

He was a well-built man, so too were the machines with which he worked, except they had all seen better days. The machines were old, nursed along by affection and necessity. Sometimes things would slip, shear, break; running repairs were accepted as a normal part of the working day.

The gathering for the threshing was necessary because Grandad still used a reaper-binder. I remember one morning when he had had brought it to a field of barley, two or three men with him to assist with the harvest. It was a labour intensive business, one man to drive the Fordson tractor, one man to operate the binder, one or two men to follow behind, picking up the sheaves and putting them into stooks. It was a day that could not be lost, for the other men had their own work to do.

Hardly had the day started when the binder stopped. The blades were not working, the barley was not being cut. Long years of experience of the machine meant Grandad straightaway knew the problem. As he corrected the fault, something slipped and he gashed his hand. A handkerchief was taken from his pocket to cover the wound, he tied it around with binder twine and the day’s work proceeded.

By the end of the day, no part of the handkerchief was left white. Returning to the farm at evening time, my father was waiting to collect me. Seeing my grandfather’s hand, he suggested a visit to the local doctor’s surgery, where emergency attention for local farmers was part of the everyday activity. The cut required fourteen stitches to close it. It was a matter of fact, not something for comment: we did not mention it.

Grandad was one of those few farmers who actually retired, though his death at the age of seventy-seven meant there were not many years away from the hard daily labours of the land. In the photograph, he would have been sixty-one years old, as solidly built as the machines which still appear at the vintage shows. 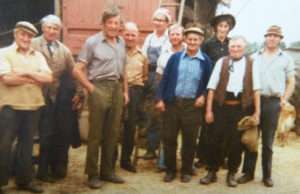