A whiff of autumn

Autumn has come early. There were three bonfires visible yesterday evening, smoke drifted across a field at the front of the house, this morning the rain is heavy and persistent. Perhaps the summer will manage one last gasp before September and the beginning of autumn.

I could never feel as sanguine about cooler and shorter days as did the singer Roger Whittaker who in the song, The Last Farewell said,

I shall watch the English mist roll in the dale

How could anyone enjoy watching mist roll through a valley?  On autumn mornings in our corner of England, the mist is a blanket of greyness that lies across the low lying moorland. It spreads dampness over every surface it touches. It penetrates and chills and shows a reluctance to go elsewhere. If the temperature drops below zero, the mist might become freezing fog, making progress difficult and dangerous.

Perhaps Whittaker envisaged something gentler. Leaves of ochre, red and gold, the scent of bonfire smoke on crisp mornings, walks through lanes and smoke from cottage chimneys, seemed more the stuff of romantic notions of misty valleys. Damp November mornings here in Somerset would hardly have inspired a song lyric.

Had Whittaker sung about mist in the summertime though, the song would have had an altogether different mood. If, instead of grey clouds and heavy rain, there had been mist rolling early on a morning such as today, it would have been the harbinger of a bright day with blue skies. Late summer mist along these Somerset lanes might be cool and damp but it will often fade to reveal lush green meadows or white fields of grain. Going through the mist, there might be glimpses of rabbits and pheasants running for cover from the oncoming car.

Mist can make familiar roads mysterious. Shapes change; houses passed every day have a different air about them. Concentrating on the way ahead, attention can be drawn to things that had been previously slipped by unnoticed. It seems odd that something that obscures things can sharpen awareness of their existence. Mist demands a sharpened concentration, an early morning drive on the M5 motorway can be filled with spectral shapes appearing from behind only to hurry ahead without thought for safety. Pale red lights can mark dark shadows ahead that take on the form of vehicles as you get near.

There is a paradox in the weather; summer mist is a shrouding, but also a foreshadowing of a glorious day. There is neither mist nor sunshine today, just the the sound of rain and the smell of damp more typical of an English summer. 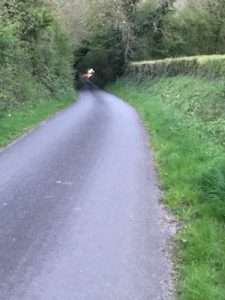