Standing on the banks of the River Parrett one afternoon, there seemed something not quite right, something missing. In memory there had been a tributary running from the river, not the River Yeo, but something running toward the town.

In memory, there had been a regatta day, Langport Splash it had been called, and there had been a challenge to paddle a raft that was called The Unsailable Avalon. The raft consisted of plastic barrels lashed to planks to which a deck chair had been fixed. The winner would be the person who could board the raft and paddle it up the river. After a number of attempts, my father, who had grown up on the banks of the River Thames at Chiswick, had swum out to the raft, climbed aboard and propelled it with complete ease – his sangfroid had been such that he had kept a cigarette between his lips and had stopped for a smoke midstream, to the laughter of those who stood on the banks watching his progress. In memory, there was water on both sides of the land on which we stood. How could it have been so, anyone who knows Langport will tell you that there is only one river in the town.

Buying an old Ordnance Survey map, a 1930 edition that had been revised in 1946, there was a suggestion that the memory might not be mistaken. There had indeed been two rivers through the town. 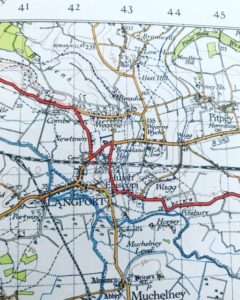 Asking my mother, whose family are at least four centuries in the parish, she recalled the “catchwater” that left the River Parrett, flowed through the town under Little Bow Bridge, and then rejoined the river.

Having enough information for an Internet search produced detail of what my mother had described.

The other memory of that regatta day was Lily the Pink being played over the public address system. Were that to be true, then if the song was Number One at Christmas 1968, then perhaps the Splash had been the summer of 1969. The book Langport and Huish Through Time includes a picture of the Catchwater before it was culverted, suggesting this took place in the 1960s; were it later, then the memory of there being a river on two sides in the summer of 1969 might be one not misremembered.

5 Responses to Missing a river