“Where are you from?”

“Somerset, I don’t think I’ve ever been there.”

“Have you been to Devon or Cornwall?”

“Oh yes, I’ve been to Devon and Cornwall.”

“Well, you’ve probably been through Somerset.”

Short of finding a map of England and suggesting that unless they had travelled to the south coast and then westwards; or had flown to the West Country airports of Exeter or Newquay; or had travelled in by sea; then they had almost certainly been through Somerset, even if they hadn’t been to it. Somerset is passed through by millions of people every summer.

Once the presence of Somerset as a place on the way had been more obvious. The M5 motorway was not completed until the mid-1970s and the tailbacks on the A38 trunk road from the Midlands through to Devon would run for miles. On the first Saturday of the school holidays, a reporter from the local BBC News would stand in the village of North Petherton and talk about how many hours it would take to make even the most modest progress. Local people would look at the traffic jams and shake their heads at such madness. To escape the congestion, our family’s journeys to holidays in Devon or Cornwall might begin in the very early morning, once we left for Perranporth in North Cornwall at midnight.

Forty years later, the roads have improved considerably, but the traffic has grown heavier. Progress on the motorway is often at a speed no greater than one might have managed on a country road, sometimes it is slower, much slower. It is not for want of investment, it is just that every increase in road capacity seems to bring forth a corresponding increase in the number of cars on the road. And anyone who suggests leaving the car at home should try travelling around the West Country on public transport.

Watching the south-west bound traffic yesterday, the so-called “frantic Friday,” the end of the schools’ summer term and the day for travel to countless West Country destination, one could only feel sorry for those caught in congestion, particularly for those with young children on a hot and humid day.

Of course, one of the ways of avoiding the congestion is to break the journey in the county they pass through, turn off the motorway and discover a county they might know little or nothing about. Perhaps those responsible for road traffic management might hand out maps at service stations, “why not stop here for a couple of hours? It’s not such a bad place.” 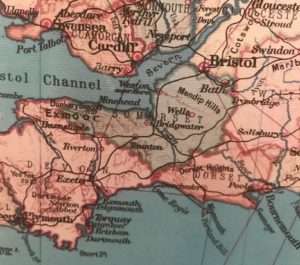