Blotting out a judge

Walking through Dorchester yesterday, I passed a pub named after the judge responsible for the 1685 Bloody Assizes.

Looking up at the pub sign, that reputedly reproduces the judge’s image, I metaphorically spat at him and said out loud the words of the Jewish curse, the Yimakh Shemo, ‘May his name be blotted out’.

Perhaps my words were a retreat into a way of thinking that Nietzsche would have regarded as a mark of weakness, a seeking of refuge in some religious abstraction.

The wish that someone will be forgotten forever, the definitive curse in the Jewish tradition, might bring a monetary sense of satisfaction, but it does nothing to change the actual reality. It does not remove them from history.

Turning the corner and walking down the main street of Dorset’s county town, I came to Barclay’s Bank. A blue plaque on the wall declares, ‘This house is reputed to have been lived in by the MAYOR of CASTERBRIDGE in THOMAS HARDY’S story of that name.’

Of course, the Mayor of Casterbridge never existed, and if he had, would he have wished for a plaque to remember him?

Michael Henchard, Hardy’s fictional character, ends his self-destructive life rebuffed by his daughter and alone.  He pronounces a Yimakh Shemo upon himself. Few people would ever write a will like that of Michael Henchard:

That Elizabeth-Jane Farfrae be not told of my death, or made to grieve on account of me.
& that I be not bury’d in consecrated ground.
& that no sexton be asked to toll the bell.
& that nobody is wished to see my dead body.
& that no murners walk behind me at my funeral.
& that no flours be planted on my grave.
& that no man remember me.
To this I put my name.
Michael Henchard

Meeting a Jewish friend this afternoon, I recounted my use of the Yimakh Shemo when encountering the picture of the judge.

‘I don’t think his name would be respected by anyone’, he responded.

‘I would rather he wasn’t remembered by anyone’. . 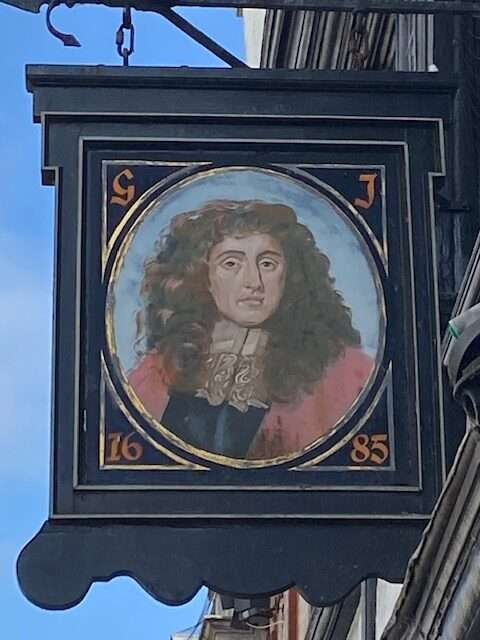