Why couldn’t it be a unicorn?

The snaps from the late 1930s were tiny, perhaps an inch by an inch and a half. A couple appear to be from the summer of 1938.

My father, born in December 1936 is about eighteen months old. He is standing in the family garden at 6 Cavendish Road, Chiswick. The impression of it being summer is created by the growth of creepers against the garden fence and by the fact that my father has bare legs and arms.

Scanning the photograph and increasing its size, there appeared to be an animal standing in front of the toddler, beside whose left foot there seems to be a basket or a trug.

“A monkey,” I exclaimed. “There was a monkey in the garden.”

“Anything would have been possible,” my mother responded. “Grandfather Bennett might have brought home all sorts.”

“Are you sure it’s not a dog?” asked a friend, looking at the electronic image.

The idea of the monkey was much more appealing, exotic stories are always much more interesting.

There would have been something somehow life affirming in the idea of my great grandfather arriving home from the dairy with a monkey.

Born in Bellary in 1878, he had been the son of a quartermaster sergeant in the British army who retired when my great grandfather was eight years old and who had died a few months later. Surmounting challenges, my great grandfather survived being shot in the face, abdomen and thigh whilst cutting barbed wire on 21st October 1917 in the quagmire of No Man’s Land in Flanders.

The thought that a man who had been through such times would have retained such a degree of levity to return from his milk round to his west London home with a monkey suggested an irrepressible spirit.

My sister looked at the picture.

Being an English rationalist and most definitely an adherent of the principles set forth by William of Occam, whose metaphorical razor cut through false assumptions. My sister was sceptical at the suggestion of it being a monkey.

A close examination led to a clear conclusion. “A Pomeranian dog, definitely a dog.”

“A Pomeranian tree dog?” I queried.

“No, just a Pomeranian dog.”

Why does the rational explanation always have to be the right one?

A monkey would have inspired imaginings, speculation, laughter at the thought of my grandmother’s response to her father coming home from work with a simian companion.

Sometimes, the unlikely and improbable would be welcome. Who wouldn’t be delighted at seeing a unicorn? 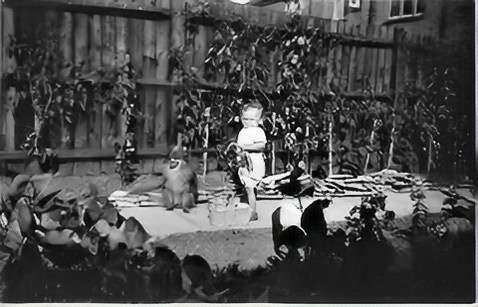 2 Responses to Why couldn’t it be a unicorn?