We laughed at the superstitions we used to have, not that superstitions seemed ever to be about anything happy. Death and misfortune seemed generally to be the order of the day for those who failed to observe the necessary precautions.

Owls were the worst omen in our rural community. They were said to be the call of the dead.

One Saturday this time of the year, my parents were out in the garden as the light was dying. As would be the wont of owls, one flew low across the field beyond the garden fence. Alarmed at the sight, I ran inside to find refuge in the television.

BBC Final Score programme was broadcasting sports results from around Britain. It would have included results from matches involving Scottish teams whose names were poetry – clubs like Selkirk and Hawick and Stewart’s Melville FP. They were rugby clubs of big, softly spoken Scots whose tries and penalties were as worthy of note as goals scored by the great soccer clubs.

It was a refuge from a deathly owl because Saturday teatimes seemed always to be moments of contentment.  There would be television programmes to watch and still the vast emptiness of Sunday to follow. Only when Annie Nightingale began her Radio 1 programme after dinner on Sunday would the reality of the approaching Monday strike home.

Sometimes there are moments when life seems to pause, when sights and sounds might be recalled with a freshness that denies their age.

Perhaps it’s simply a vindication of Einstein’s contention that time happens all at once and that the linear sequence we observe is no more than a matter of convenience.

Perhaps the result of Selkirk against Hawick on a black and white television screen seems at a paused moment because that is the case. If the whole of time is at one moment, then there is no replay nor a fast forward, each second of it is now.

If Einstein was right then the human aspiration to travel in time will never be possible, Doctor Who will forever be a television fantasy.

Not that one would wish to contradict one of the greatest intellects in human history, but it would be sad if there were never ever to be the opportunity to occupy any moment other than the here and now.

The superstitions regarding mortality, among them owls being the call of the dead, might be entirely nonsensical, but they point to a human need for the past and the future to be something other than the present. 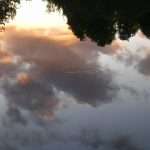