Always a sceptical race, suspicious of innovation and resentful about change, it took the English one hundred and seventy years to accept the Gregorian calendar. Introduced by Pope Gregory in 1582, it was not introduced in England until 1752. The New Year then began on Lady Day, 25th March and it seems that a twelve day shift in the dates was not going to be allowed to change the real start of the New Year. If anyone is confused as to why the English financial and tax year begins on 6th April, it is because the calendar had advanced by twelve days.

Rural England is the most conservative part of a conservative country and the change in the calendar seems to have brought a determination to continue to observe the old dates in more spheres than just the financial.

Wassailing is a very ancient tradition that took place on Twelfth Night, 5th January, the eve of Epiphany and last night of Christmas. The ritual predated the adoption of the Gregorian calendar and so it continues to be observed twelve days later in some communities, thus it is that tomorrow night is Twelfth Night (although some communities have shifted their celebration of the wassails to the weekend) .

The wassail was a ritual asking God for a good apple harvest. Of course, the primary concern was to ensure there was a plentiful supply of apples for cider making.

William Holland, an irascible priest of the Church of England who ministered in the county seemed to have been displeased by local priorities. Around 1797, he wrote,

“The Somersetshire people are of large size and strong, but in my opinion are very slow and lazy and are very much given to eating and drinking.”

Holland was obviously a man who would have disapproved of much that happened in the county on Twelfth Night each year.

The wassailing tradition is strong around the Langport area.  The local tradition is to fire shotguns up through the branches of the apple trees to ensure a good harvest, along, of course with much eating and drinking.  In some places slices of toast soaked in cider, on which the robins can feed, are hung from the branches of the trees. It seems that robins represent the good spirits of the tree.

William Holland would have disapproved of such customs because they were, of course, pagan, but such objections would have excluded most of what is now assumed to be part of the Christmas celebration, including the tree.  When American traditions of Santa are embraced without question, to the extent that it would be a 21st Century heresy to go on radio or television and express doubt concerning his existence,  a bit of home grown paganism seems very inoffensive. 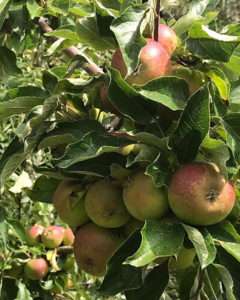