The last days of conversations

The landlord of The Woolpack pub on Emmerdale, was worried at there being no customers in his bar, times being what they are.

For many pubs, the times now are not new. I recall sitting in an empty bar in the week after Christmas, overhearing a conversation that carried across the empty room.

“Over the years we’ve had some bad cars. The engine fell out of one of them. I was taking the children to school and there was this “bang” behind us and it was the engine in the road. It was a car with the engine at the back; I didn’t expect that the engine would fall out. We stopped and I looked back and there it was. The cars aren’t like that now.”

It was a struggle not to laugh aloud as the lady continued her monologue on the ways of motoring, not that she seemed to find it amusing, the tales were told with a deadpan face and flat voice. Perhaps her companions had heard before her tale of the misfortunes of the motor cars.

The conversation moved on to the soaps they watched and those they avoided – Coronation Street and Emmerdale were favoured, Eastenders was disliked. It seemed a reasonable estimate of the qualities of the programmes, surely there is nowhere in the real world quite as miserable as Albert Square?

The three companions were of mature years and, judging by their questions, they gathered on a weekly basis, presumably on a Friday night. Their friendship was clearly long-standing, they were at ease, sat in a line on a bench, feeling no need to face their companions. How many times before had their lines been rehearsed? How easily might one person have picked up the story begun by another?

Sat alone, unnoticed, it was intriguing to eavesdrop on the Friday night gathering, two women and a man, relaxed in their own company and comfortably ensconced in the bar of a very quiet pub. Perhaps they had come here, sat in the same place for decades, perhaps their party had once numbered four. Perhaps Friday evening had represented the end of a working week, and the end of a week driving the children to school in a bad car. Perhaps it no longer mattered on which night they gathered, but out of habit they still met on a Friday evening.

The fact stories were being retold was of no consequence. Weren’t songs sung time and again without anyone complaining that they knew the words? Perhaps familiar stories were the best ones, those that had stood the test of time, those that had been refined by the passing years.

Draining the glass, I took it back to the bar, nodded to the landlady and stepped out into the night air – as invisible to the companions on departure as I had been on arrival.

When the last pub, has gone, will such conversations ever take place? 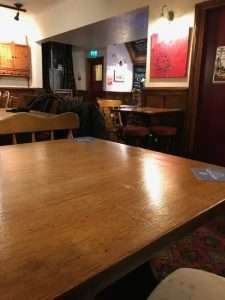