Wrapping Christmas presents seems to demand a degree of manual dexterity that I have never possessed. Buying good wrapping paper this year and a fresh roll of Sellotape, I had thought to make my gifts look more presentable. As it was, there were still uneven edges, bits of paper at odd angles, and a general appearance that suggested an inexpert hand.

My sister’s wrapping skills are at the other end of the festive presentation spectrum.  Being of an ecological mind, each gift is wrapped in brown paper and raffia and each looks the work of a master of the craft.

Contemplating a wrapped gift prompted thoughts of the film Love Actually. Only ever having seen the film in parts, I have never been sure what it is about, that’s if it is about anything other than a series of cameo performances.

Anyway, there is a moment in the film when the character played by Alan Rickman goes to a department store and attempts to surreptitiously buy a necklace for his wife. He is served by an assistant played by Rowan Atkinson, a character closer to Mr Bean than Maigret. Atkinson makes wrapping the present a work of art. No present wrapped in the way I wrap them would ever have left the store.

Pondering the film, I recalled the character played by Colin Firth, a writer living in a farmhouse deep in the French Midi. The character’s daily life seemed an embodiment of perfection, to be in gentle French warmth whilst nations further north sank into rainy grey gloom would have been a wonderful prospect.

Of course, it was a wish that could never have been fulfilled, writing a novel is as impossible a task as wrapping a present. Yet contemplating the gift on the table, there was an awareness that an Advent spent in France is not so remote a possibility.

Having turned 61 this year, I am only allowed nine more years before the Department of Education says, “that’s your lot.”

Money will never be plentiful, but with bits and pieces of pensions from here and there, life in France would be feasible. Colin Firth’s farmhouse would be in an ideal area. Var is the home of RC Toulonnais, a leading club in the French Top 14 rugby championship. Rugby, French cuisine, autumn sunshine and landscapes from dreams, there would be little else that one could want.

Then there was the sudden thought about what I would do all day. The attraction took on the crumpled appearance of my wrapping paper. Perhaps the government will raise the maximum retirement age. 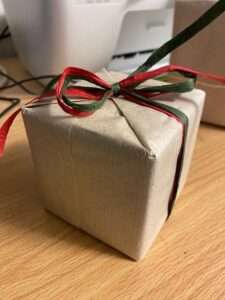