Putting out the Ritz

There is a cupboard in my mother’s kitchen that is always well stocked with various treats. Cakes, cookies, biscuits, chocolate, the selection changes, but there will always be a wide range of temptations and a high level of calories. Among the range last evening, was a box of Ritz crackers, a box in the design I remember from my childhood.

Ordinarily, the biscuits in our house did not extend beyond McVitie’s Digestives and Huntley and Palmer’s Rich Tea. It was  said that Palmers had first baked biscuits in my grandparents’ farmhouse, it seemed an unlikely story. George Palmer was from Long Sutton, (a Quaker, he was first cousin of Cyrus Clark, founder of C & J Clark), but the thought of a significant businessman baking biscuits at the family farm at Pibsbury was stretching even childhood credulity a little too far.

In the years when Ritz crackers were a new product on the shelves of the local shops (the original design has been revived because 2021 marks the 60th anniversary of their appearance in Britain), they were not the sort of thing to be found in our kitchen cupboards on an ordinary Saturday evening in the year.  Ritz crackers were not for ordinary times, they were for special occasions.

Ritz crackers appeared each Christmas, they were a staple part of festive fare. There were people who might serve them topped with such things as soft cheese and grape halves, which seemed altogether too exotic. It seemed a waste of the crackers to mask their taste with something else. Putting toppings on Ritz crackers seemed like making Black Velvet by adding champagne to Guinness, you spoiled the crackers as much as you spoiled the stout.

The taste of Ritz crackers was the taste of happy moments, the scent of the box is sufficient to conjure memories of Christmas, and the very occasional parties that might take place.

It was easy for a boy to get into trouble by taking too big a handful from the box, told not to be greedy. It was hard to explain that one could never have too many  Ritz crackers, that each tasted as good as the previous one.

Only years later did the thought occur that the name “Ritz” might have been intended to create an aura of class around the crackers, that people who ate them might have thought them indicative of living the high life. To a boy eating them, they could have been called anything and still tasted as good. 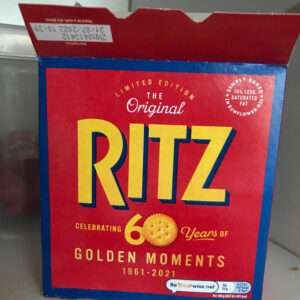