Uncle Dick died in 1971. A raconteur and humorist, he is remembered for many moments of laughter.

Born in 1894, he married Auntie Annie in 1915. Sexton at the local church, he was caretaker at the local school on weekdays. Their Bournemouth home became a place of happiness for visitors from among Annie’s family in Somerset.

Recalling her stays with he and Annie, my mother remembered how Uncle Dick would not speak of his experiences in the First World War, “he had a horrible time.”

Looking up his military record online, a record card that included his Bournemouth address, I said, “he certainly had a horrible time – he was dead.”

“What?” exclaimed my mother.

I turned the computer screen toward her and enlarged the image. On the left-hand side of the record card, in bold purple print, was stamped the word “DEAD.”

Uncle Dick was in the Labour Corps at the end of the war, an assignment that was common for soldiers who had been wounded at the front, but had recovered and were considered still fit to serve in some way. Most service records from the Great War were destroyed in an air raid during the Second World War. The single index card is the only record that remains for Richard Whiteley – a man who was definitely not dead.

A search for the father of another forebear who had fought in the First World War would probably have also caused amusement to the man concerned, for no-one seems to have been quite sure of his name.

With a variable name, Jabez seemed also to have a fluid date of birth.  Born in 1872 on some records, he is four years younger and born in 1876 on other documents. The 1876 date comes from his baptismal record, so perhaps he represented himself as older for some reason. Difficulty in researching him is compounded by his family members having similarly variable names.

While being dead or not dead is definitive, genealogy seems a very inexact science. 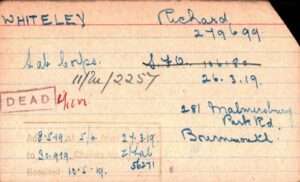