The story of a clock

It sat on the mantlepiece of the front room of my grandmother’s house. Slate with marble inlay, it is not of great value, I have seen similar for £20-£30, but it has been a continuing source of fascination since I was given it after the death of my grandmother in 1987.

It is the sort of clock presented to people in late-Victorian times for the brass plaque at the front reads:

Presented to QMS C Bennett
MS Clerk, on his retirement from Her Majesty’s
Service by the Members of the Sergeants Mess 50 RD
as a token of their regard and esteem. 7th Dec. 1886

At the time of his retirement, he was a Military Store Clerk, as might be expected of someone holding the rank of Quartermaster Sergeant. Records online suggest that he was born around 1838, so would have been in his late forties when he left Her Majesty’s Service, perhaps an age at which most professional soldiers would have retired. He served in the Second Afghan War from 1878-1880, an experience that would have been sufficient to age most men. He died soon after his retirement, perhaps in 1887. His wife is shown as a widow in the 1891 Census.

What memories would the retirement clock have brought for Eliza and Charles Bennett’s young family?

Charles’ wife Eliza, may have been Eliza McCann from Brecon in Wales, but they do not seem to have met in Wales, their marriage was in New Zealand in 1864. Eliza Bennett was of an age similar to her husband. In the 1891 Census, when she was living at Cowley in Oxford, she is shown as being 52, so was born around 1839; young Charles was 13 at the time. A decade later, the Census shows Eliza as keeping a boarding house in Cowley and Charles was working as a cycle factory hand.

The clock was passed to Charles at some point, perhaps upon the death of his mother and was brought to Yeovil by his wife, my great grandmother, when she moved from Chiswick with my grandparents.

The 20th Century story is clear, but in the thirty-odd years in which I have had the clock, I have never discovered the beginning of its story. I had assumed “50” referred to a battalion number and “RD” was an abbreviation for a regiment, but I have never found a regiment with such initials that had fifty battalions. 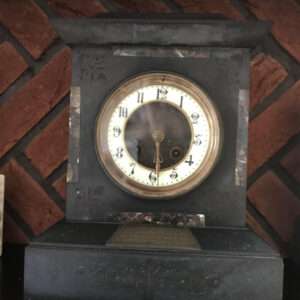 2 Responses to The story of a clock