Monmouth past and present

Back in 1972, a historical drama series was made for British television. Filling a Sunday teatime slot, it was family viewing. It was of particular interest in our village because it had been filmed on moorland to the west of the village and local people had been cast among the extras, one of whom was said to have given a momentary, but convincing, performance of dying in battle.  The drama series was set against the background of the 1685 rebellion of the Duke of Monmouth who wished to gain the throne of James II in England. Monmouth’s rising became known in retrospect as the “pitchfork rebellion.”

Much of Monmouth’s  army were ill-equipped Somerset peasant farmers who had nothing by way of military training, they were men without a hope of military victory when they were faced with the army of King James II at the Battle of Sedgemoor on 6th July 1685. Hundreds of them were cut down by musket and artillery fire.

The battle was only the beginning of a tragic period in Somerset history, it was followed by the “Bloody Assizes” of Judge Jeffreys, in which more than 300 of Monmouth’s ragged band were condemned to death.

The television series The Pretenders had been much anticipated in our community, but it came as a shock to an eleven year old boy who had grown up on Disney stories, commando comics, and Second World War films on our black and white television. For the first time there was a realisation that the people we believed to be the good guys didn’t always win.

The history lesson of those distant Sunday evenings is recalled each time Lyme Regis is visited. “Monmouth Beach,” the stretch of shoreline to the west of the Cobb was the landing place of the Duke of Monmouth, the pretender.

Schoolboys now would not be surprised that history was not a matter of “our side” winning. Readers of the Horrible Histories series of books would be aware of dimensions of history that would never have been mentioned in the history learned five decades ago. Editing out the unpleasant and the unpalatable is not an option when people, places and events can be instantly Googled, when there is a YouTube video of every horror.

History did not correspond to the schoolboy perceptions of 1972, those perceptions probably seem as naive to a schoolboy today as fairy tales seemed to those of us who watched The Pretenders. 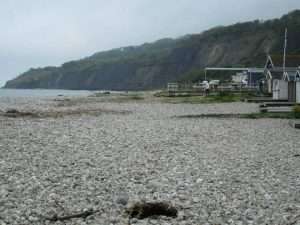