Dvorak’s Symphony Number Nine, the New World Symphony: the Largo became the base for the song “Goin’ Home.” Once, at a funeral I conducted, a male voice choir sang “Goin’ Home.” It was a transcendent moment, the sound gave the sombreness a different quality.

“We’re going home,” was what the hero would declare at the end of films in boyhood days, before the credits began to roll on our black and white television screen There would be a shot of weary but victorious men heading back to wives and families.

“You’re going home,” is a word of reassurance, a statement that all will be well, that there is no need to worry, that others will now deal with whatever must be done.

The thought of going home brings thoughts of security, of rest, of burdens set down, of a hundred and one petty annoyances being set aside. Going home is a thought to bring a moment of reverie.

“Home is where the heart is” was the received wisdom in days when allied soldiers were always victorious in television battles. What did it mean? Your heart might be in many places, or in no place at all, did that mean you had many homes, or no home at all? It did not make sense, even in those times. It seemed as insincere as those tattoos worn by servicemen that declared their undying love for sweethearts long since forgotten.

Short of making the final journey, to the strains of Dvorak, what does “going home” mean when there is no place we might call home? Is “home” an aspiration? Is it hoping for the sort of place where people might gather in American Christmas movies? Is it an amalgam of images that includes barbecues on summer evenings, and well- tended gardens, and kindly neighbours, and close knit communities, and family members coming back on surprise visits? One can hardly conjure such a home from nothing.

Perhaps, for those of us who have lived itinerant lives, “home” is like retirement, something that will only be recognized when we arrive there. 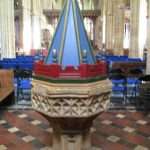 6 Responses to What is home?