In latter years, Harold Bennett drove a Bedford van with sliding doors. Such vehicles seemed to be the workhorse of tradesmen in the 1960s. Yet that model of van cannot have been the one in which my mother and her family travelled to Filton aerodrome to watch the Bristol Brabazon make is maiden flight in September 1949.

Harold Bennett would not have had a new van. 1949 was a time of post-war austerity, so the most likely candidate to fulfil her memories seems to be a 5/6 Cwt van that was first produced in 1939 and sold for the sum of £140.

Scrolling through images, it must have been a tight squeeze for Harold and his wife and my grandfather to have sat on the bench seat in the front, and for my grandmother and her seven children to have sat four either side in the back.

A generation after the trip to Filton, during my final term at primary school, friends of my parents came to visit, a couple with two daughters, one of whom was called Melanie (a name I had not met before, such was the insularity of our village). They had a brown Ford Thames van (which I discovered online to be a Ford Thames 300).

They used the van for both travel and accommodation, there was a bench across the back for the girls to sit on. In the event of there being a police checkpoint, (which seemed a fairly unlikely occurrence), the girls were told they were to lie out of sight on the floor of the van.

It had seemed baffling to a boy of eleven that there would not be proper seats in a van, until it was explained that vans were cheaper to buy and to tax because they were meant for use by workmen. If the tax office knew that the van was being used as a passenger vehicle, it would impose a much higher level of tax.

Thinking about Harold Bennett’s van, I wondered if he had always driven a van because it made simple financial sense. The bench seat at the front was all he needed for his everyday life. Tax is a strange business. 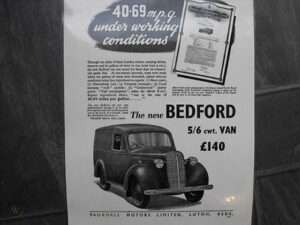