The BBC report of a 1913 menu being found during renovation work at a Liverpool cafe shows there is a long tradition of using cuisine as a mark of social class. How many Liverpool diners would have been familiar with the French name for dishes? How many would have known how to eat unfamiliar foods?

French vocabulary on a Liverpool menu recalled a conversation with a friend.

“We were at a dinner where they served slices of melon for starters. Anyway, Sid was there and I asked him how he had enjoyed the dinner. ‘It was alright’, he said, ‘but I found that melon skin very difficult to eat; I had to leave it’. ‘That’s alright’, I said to him, ‘I didn’t eat the melon skin either’.

“Anyway, he was out with some fellows who knew he hadn’t much experience of such things and they ordered mussels. He decided to watch what everyone else did, and they all picked up the whole mussels and put them in their mouths and watched to see what he would do, he put the mussel in his mouth, shell and all, and began to try to chew it. They all fell around laughing.”

It was a story that prompted a feeling of sympathy for poor Sid. As someone who grew up in times when restaurants were beyond the pockets of most ordinary people, and, even if they had the money, when many restaurants would still have had menus in French, it was not hard to understand the bewilderment poor Sid, a generation older than myself, must have felt when presented with unfamiliar foods.

Attempting to chew melon skin and mussel shells, it is hard to imagine what Sid would have made of the assorted cutlery and variety of glasses which would have confronted him in many places. The mussel shell friends would probably have been as confused as Sid at the finer points of table etiquette, but among other diners there may have been knowing glances and surreptitious winks as he picked up the wrong knife and drank from the wrong glass.

What came as a surprise was going to France for the first time, the country that is the home of cuisine. Eating in a restaurant, I made the mistake of allowing the waiter to take the cutlery away with the plate from the first course, only to discover there was no knife and fork for the main course.

Not only were the French not caught up with details of cutlery, it was permissible to ask for empty plates to share one’s meal with one’s children, whole families sat and ate and relaxed together, and meals might last for hours. Sid would have enjoyed such a place, they would have said , “Non, non monsieur, not like that, like this”.

In France, restaurants seem to be about food, not about laughing at Sid. It’s odd, the things we have so long used for oneupmanship. 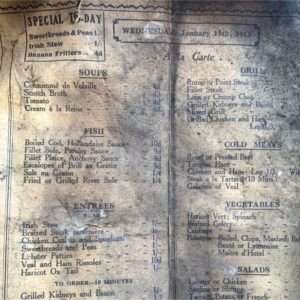