“Sir,” said another, “did you know it wasn’t really the Titanic that sank? It was her sister ship.”

I said I had heard the story of the Titanic and the Olympic.

Switching on the radio on the journey home, the presenter said that it was seven years ago that a letter from the last Titanic survivor had been sold for £119,000. The enduring appeal of the story is extraordinary. 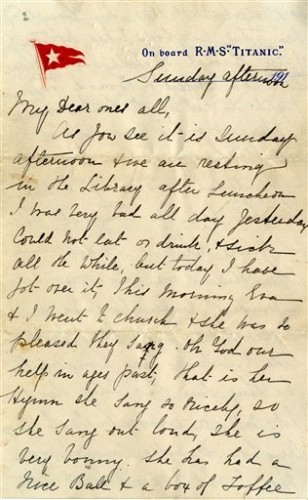 The Titanic was a popular theme in the talks at our fundamentalist Christian school.  The presentation was straightforward: it was about the downfall brought by human pride and the people singing Nearer, my God to thee as the ship sank. Except both of the stories we were told were as untrue as that of the Olympic being substituted for the Titanic.

Titanic was said to be a tale of human hubris, as an arrogance that was manifested in a claim that the ship was unsinkable. Yet such a claim was never made, not by Harland and Wolff who built it, not by White Star Line who owned it. The nearest anyone came to such an expression was a journalist’s comment that the ship was “practically unsinkable.” It was a comment that was hardly a case of the sort of endemic arrogance that was suggested in the talk at school.

It wasn’t just the belief that the sinking of the liner was a matter of pride coming before a fall: the idea of the strains of Bethany, which gained popularity as the tune for  Nearer, my God, to thee, being played as the ship sank does not accord with the facts.

On 28th April 1912, Harold Bride, radio operator on the Titanic was interviewed in the New York Times. Bride became known for his eye for detail and his accurate recall of events. He describes the final music played on the sinking ship.

“The way the band kept playing was a noble thing. I heard it first while we were still working wireless, when there was a ragtime tune for us, and the last I saw of the band, when I was floating out in the sea with my lifebelt on, it was still on deck playing Autumn. How they ever did it, I cannot imagine.”

Autumn was a popular dance tune at the time, the sort of tune a ship’s band might have played, and there is no reason why Harold Bride would not have reported things as he remembered them, particularly when the interview was so close to the event.

Furthermore, Bethany, would not have been known to Wallace Hartley, the band leader on the Titanic. Hartley was an English Methodist and would have known a tune called Horbury by John Bacchus Dykes and Propior Deo (Nearer to God) by Sir Arthur Sullivan. Methodists preferred Propior Deo and the opening notes of the tune appear on Hartley’s memorial stone at Colne in Lancashire, evidence in stone of the tune he would have played. Harold Bride remembers a dance tune and had they decided upon a hymn tune, it would have been one that Hartley knew.

Perhaps the Year 7 versions of events have a more enduring quality or a greater appeal to the imagination.