It was on this day in 1987 that Vincent van Gogh’s painting Sunflowers was sold for $39 million. The price paid was treble the previous record price paid for a painting. The price it might reach today is unimaginable. Vincent would have been bemused at such prices.

van Gogh was one of those names learned at primary school that did not sound as a primary class usually read it. Our best efforts usually sounded like the English name “Gough”, we never quite mustered Dutch gutturals. It is odd that Vincent remains in the memories of those times, long after kings and queens and inventors and explorers and soldiers and missionaries have faded beyond recall, he remains fresh.

Perhaps it was the striking colours of his pictures that impressed his name on a young mind, wouldn’t Mr Shield, our art teacher  who came each Wednesday afternoon, have frowned if we had spread our sheet of paper with great strokes of vivid brightness? Perhaps it was the odd things Vincent painted. There were flowers we might have seen, and sunflowers the like of which we had never seen, and unexpected things. There was a picture of a kitchen chair; it would have been baffling to a country primary school mind why anyone would have painted a picture of a chair. The oddest picture was of a man with a bandage tied around his head; this was the artist after he had cut off his ear. Why would anyone cut off their ear and then paint themselves? It was too much to take in.

Once I travelled to Auvers-sur-Oise in search of Vincent. The village had provided subjects for a series of his paintings. Not desiring to see the room where Vincent fatally wounded himself, there was a walk through the village and out to the fields beyond. At the cemetery, the graves of Vincent and his brother Theo seem as sad as the days on which they were buried: Vincent van Gogh 1853-1890 and beside him Theodore van Gogh 1857-1891.

Once, I talked about Vincent to two primary-aged children. “Why did he cut off his ear?” they asked.

“Perhaps it was the pain he felt inside himself,” I had shrugged.

One had looked mystified, “the pain would have been much worse after he cut off his ear.” One could not argue with the relentless logic of children.

No words could ever have captured the sadness of such a life. Perhaps I should have told the two young parishioners to look at a sunflower and to try to sense how much it might have meant to someone like Vincent. 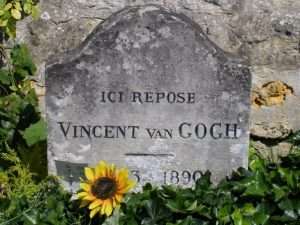