I did not like to argue. Ethics is indeed important, but shouldn’t people also learn about the environment that surrounds them?

Without geography I might not have appreciated the landscape that surrounded our Dartmoor school, without geography, I might have missed a moment that some would suggest was synchronicity.

Walking through a park one day, I had stooped to pick up a slip of paper, it was not a ticket or receipt, as I had imagined it to be, but appeared to be cut from a school geography handout. “The picture is a tor called Bowermans Nose. It is surrounded by smaller rocks forming a clitter slope.”

“Indeed, it is,” I thought, “hadn’t I climbed that slope often enough to be familiar with the granite boulders that had to be negotiated?”

Bowermans Nose stood on a hillside just beyond the school grounds. It was an outcrop of granite rocks that looked like the work of some ancient civilisation. In profile, the outcrop looked like the cartoon character Yogi Bear, with its nose and peaked cap. The name of an animated figure on television seemed much more interesting than the proper name for the outcrop, and most of the boys at school would have spoken of “Yogi Bear” rather than the seemingly dull Bowermans Nose, which would only have been used when entering it in the school exit as a destination for a walk on a weekend afternoon.

Yogi Bear seemed to stand and survey the landscape from his elevated position, impassive, unmoved, indifferent to the lives of those who passed back and forth along the narrow roads.  Yogi Bear seemed emblematic of the moor itself, a rugged and harsh and unforgiving place.

The psychologist Carl Jung coined the term “synchronicity” for moments that had no causal relationship, but were connected in meaning.  An online conversation about the school with an old friend had been followed by notes on a feature that was part of the school landscape, but which had not been discussed since the time of leaving the school forty years ago. There could be no causality, but the moments seemed connected in meaning.

Jung used his idea of synchronicity  to argue for the existence of the paranormal, it seems an unnecessary conjecture. Everyday there are countless events encountered, countless moments that have the potential for connection with other such moments, but there are no links. In the abundant experience of everyday life, it seems likely, logical even, that there should at least be some moments that are apparently connected, moments like discussing a school and then seeing mention of a landmark beside it.

The moor could be a dangerous place, Bowermans Nose, and the countryside around it, taught the importance of a grasp of firm concrete reality, or, in this case, granite reality. In a place of sharp frosts, severe snows, bitter winds, and long-lasting winters, idle speculative thought could be bad for one’s health.

The conjunction of discussion of the school and the finding of the notes on Bowermans Nose were a coincidence, they were not even events connected in meaning. Synchronicity seems to be reading into a moment a significance that does not exist. Geography is much more rooted in reality than psychology. 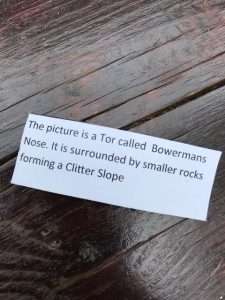