My colleague is a Northern Soul fan who is growing tired of Northern Soul fans. The music, he still enjoys. Some of the fans are a dogmatic group of purists who insist only their own definitions of what constitutes “Northern Soul” are acceptable.

I didn’t trouble him with my story of Blue Oyster Cult, he probably wouldn’t have heard of them.

Blue Oyster Cult are American rock band who have sold twenty-five million albums worldwide, but it’s almost forty years since any of their albums made the charts on this side of the Atlantic. Their greatest commercial success in Britain was their 1976 album Agents of Fortune, from which came the single Don’t fear the reaper. It wasn’t exactly teenybopper stuff.

However, if Agents of Fortune happened to be the first record by Blue Oyster Cult that you had bought,  it made you an object of scorn amongst some of the critics and the purists among the fans. “Real fans,” wrote a critic at the time, “followed Blue Oyster Cult when they were still called Soft White Underbelly.”

Music had a lot of purists. The Northern Soul movement grew out of people rejecting artists who enjoyed commercial success. The fans of Led Zeppelin and Deep Purple tended not to take Yes as a serious band. There were serious rock enthusiasts for whom mention of Rainbow or Status Quo was heresy (don’t ask me why, the ones I knew adhered to a rigid code of what was “in” and what was “out”).

Purists were a strange lot; it was almost as if success somehow compromised their integrity. Or maybe it was some insecurity on part of the fans, as if the band was subject to their own personal patronage and that a growth in the number of those buying the records would somehow dilute that sense of ownership.

Only years later, did I reach the point where I would admit to liking stuff that would have brought scorn and derision from the purists.

A man I knew in Dublin played in an AC/DC tribute band.

He gave me an odd look. “I didn’t think you’d be into the heavy metal.”

“I like a bit of the old soul myself,” he said.

I didn’t tell him I had seen Blue Oyster Cult at the same festival. It’s good to escape from the purists. 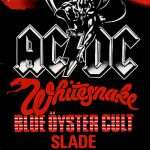