Among hundreds of old photographs, one that is blurred, out of focus, and indistinct caught the eye.

A group of boys standing beside a sea wall stare towards the photographer. It is a school outing, but they are in their ordinary school uniforms. Black blazer and trousers, grey shirt, grey tie with thin purple and green stripes, the school was a monochrome place.

The monochrome character of the school extended beyond the uniform, the world was black and white. The white was the puritanical religion of the founders and their staff, the black was just about everything that might have interested a teenage boy.

Yet this would have been a day enjoyed by boys.

The outing would have offered an escape from the world of Bible-reading, chorus-singing and lengthy ex tempore prayers.

There would have been no school meals, instead there would have been picnic lunches and teas. The food would have been prefaced by a lengthy invocation of the almighty and thanksgiving for his goodness. The more sceptical among the boys might have commented that he could have done better, given the substantial fees that the council of the counties from which we came were paying for such sustenance.

There would also not be the daily tribulation of showers. All of us lined up, naked, waiting our turns, eight at a time, to go under the sprinklers while a housemaster with a clipboard barked orders at those he deemed not to be washing with sufficient vigour.

No religious stuff, no school meals, no showers would have been the elements of a good day, but what would make the day a special day was being at the seaside. Any trip to the seaside, whether it be the regular Saturday afternoon visit to Paignton or Torquay, or a weekday trip further afield that necessitated blazer and tie, was a chance to slip into a borderland.

At the seaside there was a chance to escape the hawk-like watch of the housemaster. It was as though we had crossed a frontier into a land where the writ of the school no longer ran.

Most of us did no more than wander around, looking in shop windows, going through discs in record shops, drinking coffee in a cafe. There were a few who used the trips as an opportunity to smoke cigarettes, but the few coins of pocket money would not have bought many.

The seaside was a moment of freedom. The boys standing beside that sea wall would have relished every moment of that day. 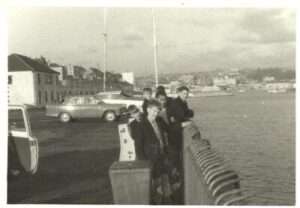 1 Response to Beside the seaside