My cousin’s son is the image of our grandfather, so much so that I posted pictures on Instagram: one of my grandfather on his wedding day in 1935 and one of his great grandson eighty-five years later. The family genes are very strong, the shape of the nose, the eyes, the hairline, the enigmatic smile.

Perhaps genes are manifest in terms of personality as well as physical features. Perhaps there are genetic messages that pass on personal likes and preferences and choices of lifestyle.

Farming was not just about what my grandfather did, it defined who he was. Farming shaped every hour of every day. There was no question of clocking off and going home for the day, at any time on any day there could be urgent matters to which to attend. Farming determined who were his friends, for the only people he saw were those who gathered at the market, or those who gathered at the farm to lend a hand at busy times. Farming governed spending decisions, education choices, plans for the future.

Eighty-five years between the photographs and the great grandson continues the family tradition of living the farming life. He posted a picture this week of ploughing a field of stubble, a flock of gulls followed the tractor. There was something timeless about the scene.

Of course, in 1935, my grandfather took considerably longer to plough a field than it would take now. With the horse that did the heavy work on the farm in those days before the tractor, he might have completed a single acre in a hard day’s work. In 2020, the tractor pictured can plough four or five acres an hour.

Despite the differences in the amount of land that might have been ploughed, there is a continuity in the life.

Farming might be more business-like, more technological, greatly more mechanized, but the challenges have not gone away. There must be a gene that helps people cope with such a life. 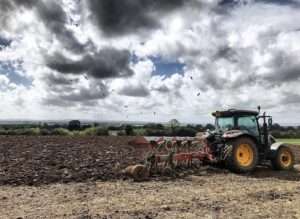