PTSD, it would be called now. Perhaps there was a name for it in the 1960s, if there was I never heard of it.

The stay in Tone Vale Hospital lasted long enough for the visits to remain in my memory. I was six or seven years old at the time and we would wait in the car while my grandfather was visited by my grandmother and one or other of my parents.

The visits lasted long enough for us to need to take a picnic tea which we would eat sitting in the car. My grandmother would have a bag filled with sandwiches and cakes and a flask of tea.

My grandfather was a fireman with the National Fire Service, a Section Leader, he served in London throughout the war, including all through the Blitz. The experiences were harrowing: people hideously burned, bodies, fragments that had once been people. There were no debriefings, no-one with whom to discuss the emotions evoked.

Perhaps the nightmares had always been with him, perhaps he had always suffered flashbacks. By the time he was sixty, in 1967, the trauma had gained the upper hand and he was hospitalised. He would shout aloud across the ward, warning people of dangers, shouting in alarm at things he had imagined.

My grandmother, like most people of the time, could not understand such behaviour and would shout at him to be quiet and to stop being silly. My grandfather’s illness was something not to be discussed, it was considered to be a lack of willpower.

In the Great War, my grandfather would have been accused of “LMF” – a lack of moral fibre. By the 1960s, with the experience of another World War, there would have been a greater understanding of the human psyche, but it was not sufficient to ensure that he received more sympathetic treatment by my grandmother.

Tidying shelves and sorting through things, I found my grandfather’s magnifying glass. Picking it up on a summer’s afternoon, there was a sense of the gentle, softly-spoken man sat in his armchair at his East Coker home, carefully going through the pages of his stamp collection, closely examining stamps from far corners of the Commonwealth.

Reflecting on memories of him, it is hard to reconcile the quietness and reservation with the requirements of commanding a fire crew.

He was sixty-five when he died, seeming an elderly man. Perhaps people grew older younger. Perhaps the PTSD had aged him prematurely. Holding the magnifying glass, I wondered what thoughts he may have had as he used it. 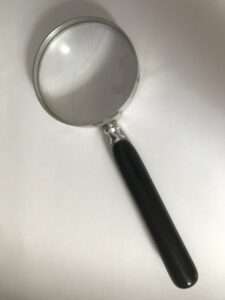