In his groundbreaking book Teenage Religion, Harold Loukes reported on surveys with fourteen and fifteen year olds around the country. Young people who were about to leave school, and enter the world of work at the age of fifteen, were vocal and consistent in their religious ideas.

The surveys were carried out using tape recorded class discussions and open-ended questionnaires. The results would not have been encouraging  to the church leaders at the time, (and were undoubtedly rejected by many who preferred not to accept uncomfortable truths), but would have been intriguing to those who sought to understand young people born in the post-war years.

One of the fascinating aspects of Loukes’ book is the cover photograph. Other than the name of the photographer, no details are provided. There are no clues as to which class in which school were on the other side of the lens, but even without details the shot tell a story of the young people of the time.

I remember teenagers in 1970. You could have told straightaway from their hairstyles and their dress that the 1960s had changed everything.

Loukes’ teenagers are less easily located in time. As most of the class look towards an unseen speaker, one girl stares fixedly at the camera. The girl is wearing a short sleeved dark dress and a pearl necklace, it is an outfit that might have been worn by her mother. There are boys wearing sports jackets with collars and ties. A handful of teddy boy haircuts suggest the 1950s have been reached. At the front sits a boy with a teddy boy haircut and a leather jacket, the only undeniably youthful fashion in the picture.

Perhaps 1960 was in a transition period between times when teenagers were younger versions of older people and times when being teenage was to be different. The traditionalism of the way in which many of them are dressed perhaps makes the non-traditional religious views they expressed more fascinating, or perhaps their beliefs are the way in which people have thought for generations, but only in 1960 had the courage to say. 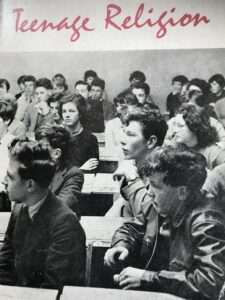