A locomotive at the window

Looking out from the delightful La Fleure shop in Langport, the view is of The Hill and of the corner at which North Street meets Bow Street. An Instagram picture prompted reflection on a familiar story. What if one had looked out of the window and had seen a steam locomotive turning the corner from Bow Street into North Street?

One of the stories with which I grew up was that a locomotive had once steamed through the streets of Langport. It had always seemed an exciting story, the vision of a steam engine puffing its way up the street of our small town. However, the vision was clouded a few years ago by a railway enthusiast friend who questioned how such a thing might have taken place.

The initial question was “why?” Why would anyone wish to take a steam locomotive by road when all it needed to have done was to travel out to the junction where the two lines line and travel back to the town on the other line? Why embark upon an exercise that would have taken hours when it could have been completed in minutes on the tracks?

The second, and deeper question, was “how?” Trains did not run on roads, they sink into soft surfaces and come to an undignified halt. How would anyone have driven a locomotive through a small town? Thinking about the particular circumstances of Langport, the story became more and more unlikely. How would a locomotive have been removed from the tracks at Langport West and then been driven up the sharp incline that approaches Langport East? How would it have negotiated the narrow streets? How would it have got around the ninety degree bend from Bow Street to north Street? And, had it found its way to the far end of the town, how would it have been put back onto the tracks? Anyone who has seen pictures of railway derailments will know how difficult it is to get a locomotive back onto the line.

Discussing the story with my mother some years ago, she said that if there had been no truth in the story, how did it begin? Why for so many years had we been told about the Langport locomotive? Presumably, there was some logical source for such an unlikely tale?

A copy of a book published more than forty years ago by the Somerset Federation of Women’s Institutes offers an answer. It includes a collection of anecdotes on the local railways, including the following:

When the new railway line was being built from Castle Cary to Curry Rivel Junction in 1906, it was necessary to bring an engine from Langport West Station to the new line at the other end of the town. As it would have to be taken right up through the main street, it was decided that the operation should be carried out late at night, in as much secrecy as possible. However, the rumour spread, and the whole town stayed awake to see the sight. Crowds lined the streets, children stayed up, people from the neighbouring villages poured in. Presently the engine under its own steam, came chugging up through Bow Street, with driver and fireman bowing gallantly to the assembled populace. What would happen when “Town Corner” was reached where the road took an almost right-angled bend, with a bow fronted shop window on the corner? Here the crowds were thickest and faces appeared at all the windows. However, the railway engineers were equal to the task. Steel plates were laid on the road, and a gang of men with long poles were stationed outside the shop, with instructions to “Hold her up if she starts to tip.”. All went well, the engine safely negotiated the corner, the driver waved his cap, and to the cheers of the people, shouts of “Good old Charlie” and “the Great Western’s done it again,” the victorious little engine chug chugged along North Street to its work on the “new line” at the East Station.

The story still seems an odd one, there is no explanation as to why it was necessary to carry out such an operation. If Langport East was open, then why not follow the line that had been laid? If Langport East was not open, then where would the locomotive travel? Apart from the turn outside of La Fleure, there is no explanation of how the locomotive was lifted from the tracks, nor how it was lifted back onto the tracks, yet the unlikely seems true. 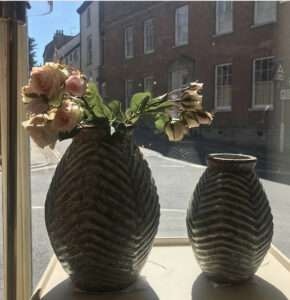