A caricature peers from a shop doorway. It is unmistakably that of Ronnie Barker in his television role as Arkwright in the BBC Television comedy series Open All Hours. It is thirty-five years since the penny pinching shopkeeper who had a constant eye to making a shilling last closed his corner shop, but his image remains fresh and recognizable

A shopkeeper did not have to have the characteristics of Arkwright to be well-known in a local community. Shopkeepers were key members of a community. In rural areas, in times before the near universal access to cars, the shopkeeper was one of the most significant people you encountered every week.

In our village, Mr Spearing kept the shop. A genial man who seemed old even when I was young, he was gentle and softly-spoken. The old fashioned shop front included his name engraved in Gothic letters in the glass above the door: S.Spearing. It was said that his Christian name was “Simon,” but not once did I ever hear anyone address him in such an informal way.

Spearing’s shop was an old-fashioned establishment. There was a wooden counter and the stock was displayed on shelves on walls behind the counter. On the left-hand side of the counter there was a glass display case with a white wooden frame. It contained the confectionery and children be expected to ask politely for the bar of chocolate or packet of sweets that they wanted.

Mr Spearing must have stocked frozen as well as fresh food, for I remember once being dispatched on my bicycle to buy Brain’s Faggots for our tea. (Farming families would have had their cooked meal at lunchtime and called it dinner; families whose parents worked out of the village sat down to dinner in the evening and called it “tea”).

Perhaps Mr Spearing should have had a character closer to that of Arkwright, he always seemed too soft-hearted to be a successful businessman. The image of Arkwright that lingers in the memory is that of the grimace and the raised eyebrow, the expression of disappointment at a sale not made. The memory of Mr Spearing that lingers is that of a gentle smile and a kindly word.

The gaps between the television character and the Somerset shopkeeper is as wide as can be imagined, yet if someone had drawn a caricature of Mr Spearing, it would have been as distinctive as that of Arkwright. 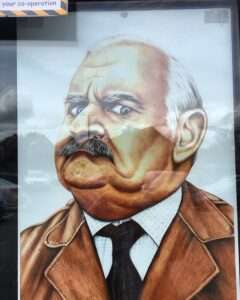