Lockdown has meant the loss of many things other than lessons. Educational visits, outings, overnight camps, trips to France and beyond, everything has been cancelled. School sports days will be especially missed by many people

School sports days now are very different from those of fifty years ago.

At primary school, no-one had equipment beyond black plimsolls; athletics was done in whatever one stood up in.  A sand pit provided the venue for the high jump and the long jump; running was simply a matter of starting at one point in the field and finishing at another; there were no markings on the grass.

Miss Rabbage, our teacher, used to practice inclusivity in times before the word was known. The junior sports day for the Langport area was an occasion when she would try to ensure everyone was entered for at least one event. My race was the sack race, it being commented by classmates that my feet pointed the right way for the corners of the sack. The sack race was an event for duffers, all the serious competitors being kept for entry to proper races.

Briefly, though, for just one summer, it was different. It came as a surprise for everyone, particularly for me.

The word “go” was shouted and, head down, I seemed to run faster than I had ever done in my life. I finished second.

This caused a degree of consternation. There was a conferring between the staff and it was announced that the race would be run again (presumably, in expectation of a different result). I came second for a second time.

At the Langport Area Junior Sports Day, I ran the third leg of the relay. I can still remember the delight of that moment. Our team did not win, but we did better than we had ever done before. There were great congratulations and a fine certificate to take home.

And there was still the sack race to come. The red certificate for coming third in it seemed insignificant compared with the turquoise confirmation that I could sprint. 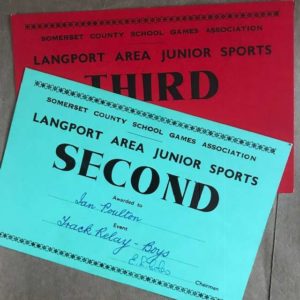