We were all once children. It seems something easy to forget. Leafing through a family photograph album, it can seem strange to look at pictures of people now long dead when they were young.

There are photographs of my grandparents in the 1920s. My grandfather was born in 1906, my grandmother in 1909, so they are teenage or in their early twenties. The people in the pictures are very different from those whom I remember.

The grandfather I remember was a quiet, reclusive man, sat at the fireside in a rocking chair. In the cupboard beside him he kept his stamp albums. Magnifying glass in hand, he would spend many hours poring over stamps from distant Commonwealth countries.

It is an image that seems far removed from the young man who stares out from a series of photographs.

In one picture, he is playing billiards. Someone has taken a picture of him at pocket level, from the other side of the table. My grandfather looks intent on the shot he is playing, indifferent to the presence of the photographer.

My grandmother gained a job in the Post Office savings bank when she was eighteen years old. Post Office jobs were gained through taking examination and she was proud of her job. Her colleagues included Hannie Collins, sister of Michael, the assassinated Irish Republican leader.

In later life, my grandmother confessed to a certain vanity in her younger years. Having a “permanent style” in her hair was a priority. “It might cost me a week’s wages,” she said, “but it was lovely having curls.”

The photograph of the fashionable young woman with her bobbed boyish hairstyle, fur collared jacket, and collar and tie is recognisably my grandmother, yet the image seems hard to reconcile with the person I knew. 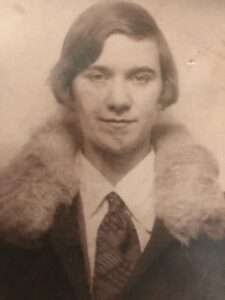