There’s a black and white photograph of my grandfather. He is standing on open ground. Perhaps it was taken on a trip to the seaside, or on a visit to somewhere in the countryside. He is wearing an old sports jacket, corduroy trousers that are worn with wear, heavy black boots, a V-necked pullover and an open-necked white shirt.

It is a photograph that might have been taken in the 1950s, or even in the years after the war. More likely, it is from the mid-1960s, after he and my grandmother had moved from Chiswick in West London to Yeovil in Somerset.

Calculation of his age is alarming. He was born in a workhouse in Isleworth in November 1906, which means that he would have reached his sixtieth birthday in the autumn of 1966. For years, I have looked at his photograph and thought him an old man, and now realize he was only the age that I will be this year.

Papa died in February 1972, when I was eleven. He seemed an old man, but was only sixty-five. My memories of him are of a silver-grey haired, moustached man sitting in an armchair beside the glass-fronted fire that made the room seem always warm. Papa’s passed his time stamp collecting, working in the garden, and, occasionally, going fishing.

Perhaps he was old before his time. His mother’s poverty and anonymous father means his upbringing cannot have been easy. His Jewish identity brought persecution from the Blackshirts in the 1930s. His years in the National Fire Service in London during the Second War brought horror and trauma. He spent time in psychiatric care in the late-1960s, suffering from what would now be described as post traumatic stress disorder. In the 1960s, he was diagnosed with Type 1 diabetes, it being suspected that he had been diabetic for years.

In memory, he was a man who never, ever raised his voice. Perhaps his health made anger something too demanding, perhaps he had seen too much of the brutal realities that life could present to become annoyed at trivial things. For years, I had assumed that he could not drive, only on the anniversary of VE Day did I discover that he could drive, but did not do so.

And yet, despite everything, there was a gentleness, a contentment about him. Boisterous grandchildren cannot have been easy for him, but he always smiled and spoke softly to us.

When he died, he was cremated and his ashes scattered. Were there a grave, I would go to it and ask the many questions for which I shall never find an answer. 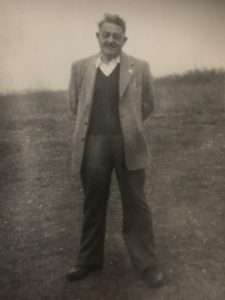