The distinctive scent of blackcurrant jam in the fridge evokes moments from the 1970s.

It must have been 1971, for transistor radios were constantly filled with the sound of Chirpy, Chirpy, Cheep, Cheep. My dad had a week’s holiday and we spent time picking blackcurrants at a fruit farm which paid pickers so many pence for each pound of currants they brought to the farm buildings, the buckets being placed on scales and then the fruit being tipped into bigger containers. There were lots of people there; there was not much money around in 1971 and the chance to earn something extra was not one to be passed.

Did we pick enough fruit to earn a few pounds? It’s hard to remember. A few currants were eaten, but after a few handfuls the hands and the lips were black and the appetite had worn off.

We spent the other week of my dad’s annual holiday in a caravan at Lyme Regis. It was our first family holiday and it remains an important moment.

It is strange thinking back how few holidays people had. There was Christmas Day and Boxing Day, Good Friday and Easter Monday, Whit Monday and August Bank Holiday – six public holidays a year and perhaps a week or two of annual holidays. To spend a week blackcurrant picking would seem odd now, but working for part, or all, of the annual holiday was common enough.

Looking back on such times, there is a sense of how much time people have now. The working week was often five and a half or six days. Working an eight hour day at a local nursery meant starting at 7.45 am and finishing at 5 pm, the tea break and lunch hour being in your own time. I remember my dad leaving the house at seven each morning in order to be able to be at the naval air base at Yeovilton to start work at half past seven. In the 1960s, security at the air station was such that I was allowed to accompany my dad to work, sitting in the hangar among the aircraft while he worked on the radio and radar equipment.

To have had four or five weeks annual holiday then, as well as extra the extra bank holidays that have been introduced in the past five decades, would have left you feeling like a millionaire – and have provided many more opportunities for picking blackcurrants. 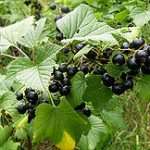