Were I fifty years younger, I would find constant fascination in government websites. A recent discovery has been the Flood Information Service which this evening carries the following warning for the Langport area:

Flooding is possible – be prepared

Fifty years ago, the pumping stations included in the warning seemed like battleships in hostile waters, protecting the farms and the villages against the rising floods. They seemed always there; although a second thought about the buildings would have told even someone who knew nothing of architecture or engineering that they were recent arrivals on the scene. A government website says they were built in the 1960s and that there are twenty-one pumping stations in Somerset. Prosaic in appearance, the grey concrete and steel adding to the childhood impression of their being like naval vessels, they possessed a sense of mystery for someone who would rarely pass a day without seeing one of them.

The pumping stations seemed always to be isolated, probably a not unreasonable impression. Even the one at Westover, on the edge of the town of Langport, seems to stand at a remove, as though it were keeping a respectful distance from the other buildings of the town. Of course, given that its work is flood prevention, it is hardly likely anyone would have built on the hinterland of a station; were there a pumping station at the end of a street, the street would be in the wrong place.

The pumping stations seemed to capture the spirit of the place. Like buildings on a seashore, they stood at the margins of dry land and water. The Somerset Levels are lands claimed by hard work; they are flatlands that were once bog and marsh, expanses of wetness, tracts of water. They are still summer lands from which herds might be withdrawn when the winter rainfall comes. Like the childishly-imagined battleships that were guarding a coast, the pumping stations represent a battle to hold on to the land dear to those who work it. Farming on the Levels is very different from that in many places; it is always marginal and always demanding.

The pumping stations declare that the Levels will not be taken. 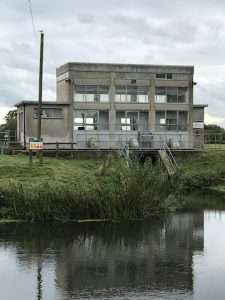