The last generation to be forgotten?

Clifford was probably a cousin of some degree. In this village, he might have been doubly a cousin, related on both sides of the family. Yet, if he was, his name has been unknown.

The mother young mother’s son had died at the age of 60, in 2008: had his mother died in childbirth, or some ensuing complication? The headstone tells no story, why would it need to do so? Everyone around would have known the circumstances. Communities were places where everyone could tell the story of their neighbours.

The inscription on Clifford’s headstone reflects a community where no explanation would have been needed. “In loving memory of our dear son:” there is no need to explain who was remembering, no need to include parents’ names for everyone would have known who they were.

Yet in a village where the old ties of community have faded, who is there now to remember? My mother, who would have been eleven years old at the time of Clifford’s death and who possesses a wealth of oral history and genealogical detail, tried to recall his name, concluding that he was possibly the brother of the husband of one of her second cousins.

Strangely, whilst community ties have faded, it is more likely now that people will continue to be remembered long after their death. People leave increasingly large virtual footprints, online presences.

Facebook may choose not to delete the accounts of deceased users, but rather to memorialize them, to freeze them as they were in memory of the person. Other social media presumably have their own ways of dealing with the presence of those who are no longer present.

Websites will presumably continue as long as someone continues to fund their hosting and make such technological changes that are from time to time necessary.

Had Clifford died seventy years later, he might have left a vast virtual store of information about himself, a trail of posts and profiles telling his story to anyone in the world who might have asked. Perhaps those of Clifford’s generation are the last of those who can be forgotten unless care is taken to remember them. 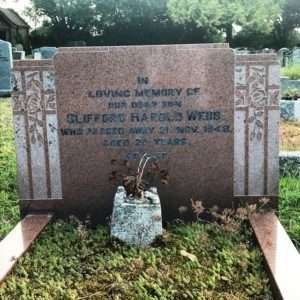