More than a dinner lady

Sometimes you turn your back for a moment and, when you turn back, you find someone has gone.

Walking among the familiar faces in the village cemetery, I met Mrs Cullen. I had never thought about Mrs Cullen having died, she no longer lived at Number 4, but I had never heard that she had died. There was a moment of regret that someone who had played such a big part in the lives of the children of the village had died, and that I had never known.

It is hard to imagine that there would be an opening for a Mrs Cullen in any school today. The multiplicity of policies intended to eliminate any possibility of risk, the insurance implications of any activity that is planned, the requirement that one have completed a course and have been awarded a certificate for almost any endeavour contemplated would ensure that someone who served school dinners and was caretaker would not be considered for any other role.

The world is a poorer place for want of opportunities of new generations of Mrs Cullens to emerge. Good hearted people are no longer considered appropriate for the roles Mrs Cullen played.

Without Mrs Cullen, many of us would have had no outings, no chance to take part in sports, no memories of lunchtime games in the school field.

It is funny to see her name inscribed on the headstone. Of course, we knew her name was Ivy, but no-one would ever have dreamed of calling her it. Mrs Cullen was, and always will be, Mrs Cullen. 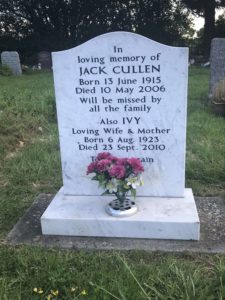