Awaiting a Church of England resurrection

Walking in the village churchyard of our Somerset village, lines of John Betjeman surfaced in the consciousness. A holiday in Ireland prompted Betjeman to reflect on his experiences of the Church of Ireland.  In his poem Ireland with Emily, he conjured a vision of the Church of Ireland as an institution that consisted in crumbling buildings and isolated handfuls of people who were the last of the line.

There in pinnacled protection,
One extinguished family waits
A Church of Ireland resurrection
By the broken, rusty gates.
Sheepswool, straw and droppings cover,
Graves of spinster, rake and lover,
Whose fantastic mausoleum,
Sings its own seablown Te Deum,
In and out the slipping slates.

Betjeman’s suggestion that people might be awaiting a “Church of Ireland resurrection” seemed a piece of gentle mockery, a jibe at those who had so much lived their lives as a people apart from the general populace that on the last day it might be thought that they would look in hope of a Protestant Second Coming.

Perhaps Betjeman could not have imagined that the Church of England he knew and loved would follow the same course. In our group of parishes, there are already two churches that have been made redundant, frozen at a point in time at which they will forever remain. Most of the remaining churches will be gone in the next ten years or so, there are simply not the congregations to sustain them. The buildings will remain, in the care of trusts, the centuries of history they represent telling the stories of the communities they once served.

The gravestones at High Ham church are mostly Victorian. More recent interments are mostly in the village cemetery. Only part of the churchyard is regularly mown; the rest often disappears under a cloak of long grass and weeds. The headstones are crumbling, fading, sometimes broken. Some are shrouded in moss or ivy. Some stand at precarious angles, threatening to collapse to the ground long before Doomsday is reached.

If John Betjeman had walked in our village churchyard, wouldn’t he have been inspired to thoughts similar to those he had experienced in the company of Emily? Would he not have noticed the extinguished families and the crumbling stonework? Would he not have reflected on a culture now so forgotten, now so removed from contemporary life, that the resurrection it awaited was one of a peculiarly Church of England kind? 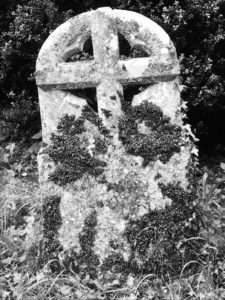