Spending a few minutes at the grave of my grandparents, I wandered through Huish Episcopi churchyard. There are headstones that still have the capacity to make me stop, people who were old in my memory, but who died at an age younger than I am now.

It would seem strange to visit to the churchyard and not step inside the church, if for no reason other than to look at the stained glass window by Edward Burne Jones, one of the Nineteenth Century artists who belonged to a group called the pre-Raphaelite Brotherhood. It is always difficult to know if Huish Episcopi or Long Sutton is the “home” church for our family: baptisms and weddings seem to have been at Long Sutton, funerals at Huish Episcopi.

In our local community, I identify myself as a member of the Crossman family from which my mother came. Poultons were a London family, while Crossmans have been in the parish for more than four hundred years. The Crossman name immediately ties me to countless cousins of varying degrees; it says that I am local.

It was a conversation about being a Crossman that led me to search the walls of the church today. Someone had told me that there was a memorial plaque to Crossmans; a close scrutiny of every part of the building revealed no such plaque.

About to give up, I noticed the plaque in memory of Reg and Sidney Slade, brothers from the parish who had died in the First World War. Reg had died at Ypres in the opening weeks of the war, Sidney two years later. Is this was what the person had meant?

Reg and Sidney Slade were grand uncles of a family who are my fourth cousins, which, if they were on the right side of the family, would have made them the second cousins of my grandfather, meaning they shared a common great grandfather, Thomas Crossman. Would that have been sufficient connection for them to have been remembered as Crossmans?

I took a photograph of the plaque and tried to work out what connection they might have been to me – two removes would take me to my grandfather’s generation, so, if they were his second cousins, would they be second cousins twice removed to me? I gave up trying to work it out and walked into Langport.

Did the precise connection matter? Is rootedness something deeper than genealogical details? 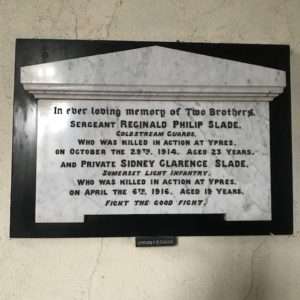