Not at the station

At the site of the old railway station in Burnham-on-Sea, there is a plaque that purports to date from the days of the Somerset and Dorset Railway. Reading the inscription might prompt the more sceptical to question its authenticity. However, mention of the railway recalled a conversation I once had whilst working in the Irish Midlands.

Shaking hands with a visitor one Sunday, I asked, “Where are you from?”

“Yes, I’d hear that, but where in Somerset?”

“Between Shepton Mallet and Castle Cary.  Do you know them?”

“I used to have friends in Shepton Mallet and used to be able to get the train from Castle Cary to Paddington for £3.15 return”.

“£3? I used to get the train from Evercreech Junction to Bristol for.

“I would have loved to have travelled those lines”.

It was my ambition in retirement to visit all one hundred and eighty Somerset railway stations.  Being honest, there aren’t one hundred and eighty stations in Somerset; there are only thirty, and eleven of those are on a railway preservation trust’s line, but there once were. The three Somerset counties – Somerset, North Somerset and Bath and North East Somerset – had one hundred and eighty stations on a web of different lines. Many of them were never viable, built distant from towns and villages in places where the population was sparse. The Somerset and Dorset line from Evercreech Junction to Highbridge ran across peat moorland, at a remove from villages where people wished to travel to Street or Bridgwater, not to Burnham-on-Sea

Railways have always had a special fascination for me, even as someone who has never known anything about engines or engineering. Maybe they represented an ordered world, a safe world ordered by timetables. Maybe they were from a world where people were still courteous and the country had not been franchised out.

Maybe it’s just a case of being a grumpy old man who thinks that John Betjeman’s England was not the worst of places.

I didn’t get the chance to ask the man if he had access to the Internet.  If he had, he would  have enjoyed the laureate Betjeman himself travelling through Somerset; through stations the location of which I might one day seek out. I would doubt very much if the sign at Burnham-on-Sea was found at any of them! 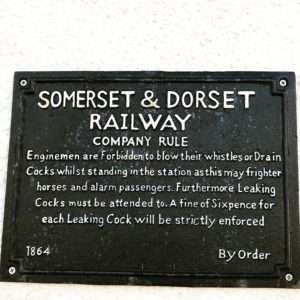