A mood of eager anticipation seems to exist among most of the school community. One student, describing themselves as “the Grinch” complained that it was just a time when the family could fall out with each other more than they usually did, but such voices are a small minority.

Arriving at school between 7.15 and 7.30 each morning means arriving in darkness; leaving for home between 4.30 and 5.00 means leaving in darkness.  The daylight hours are passed in the confines of the school grounds. On weekdays, the outside world has become a place seen in street lights and headlights.

It is in the world of darkness, twilight and shadows that the early risers have become an encouragement.

I am not the first on our road to leave for work. By the time I depart at around 6.30, the next door neighbour has been gone ten or fifteen minutes. Although the village is deeply rural, to pull out of a junction without looking would invite a collision, there is a steady stream of traffic lights. By the time the narrow winding byway that passes itself as the A39 is reached, there is sometimes a need to pause and wait for a break in the traffic. At the traffic lights before the motorway is joined, every lane will be filled with cars. The early risers are plentiful.

More encouraging than the headlights of vehicles are the buds and blossoms now appearing. On the road out of Somerton, last Christmas Day, the verges were filled with daffodils in full bloom. Only when they were passed did the thought occur that it was December and that daffodils were flowers to be expected in February and March.

Stopping the car to take a picture of the daffodils that Christmas morning, the times seemed out of joint. If the daffodils bloomed in the darkest days of the year, what else might we expect? The summer turned out to be one of the hottest on record, but in between lay those days in March when the so-called “Beast from the East” covered these temperate regions in a blanket of snow.

Yet, no matter how uncertain the weather, there seems something irrepressible in those early rising plants. They are a declaration that winter is passing, that even if it lingers, it has lost the battle and that everything is coming to life again. I still like to see the snowdrops, but if you can have daffodils in December, it’s even better. 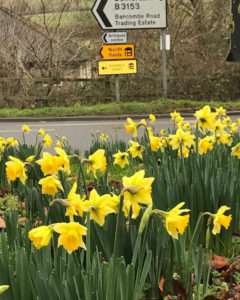