Visiting Dorchester recently brought memories of the world evoked by the writing of Thomas Hardy. Hardy writes with an extraordinary eye for the detail of rural life. It is not hard to imagine the scenes he describes.

In Far from the Madding Crowd, Hardy describes Gabriel Oak being disturbed from his sleep by the barking of a dog and the frightened. bleating of a flock of sheep. There is one thing for which Oak instinctively reaches, the double barrelled shotgun that lay close at hand. For what else would he have reached? Shotguns were to be found in every farm. To have gone to an agricultural dwelling in Hardy’s Wessex and not to have encountered a gun would have been an odd thing to have happened.

Ninety years after the time of Hardy. the shotgun was still an everyday sight. At our family home farm at Pibsbury, between Long Sutton and Langport, there was a passageway that ran between the farmhouse and the dairy. It was a repository for miscellaneous “useful” items placed there by my grandfather, it was the place where the shotgun was to be found. A conventional 12-bore in calibre, its double-barrels were a polished, dull black and the wooden stock was a rich chestnut colour. The gun had a frightening fascination for a small boy, it meant both danger and safety.

There were guns in the locality that were used for game, the shooting of rabbits, or pigeons, or pheasants. Occasionally, there would be clay pigeon or skeet shooting, but on most farms the gun was a utilitarian piece of equipment. Perhaps cartridges were expensive, perhaps there was not much time to put the guns to other uses, perhaps there was not a great inclination to do so, but the shotgun would only have been lifted against foxes and rats.

Words of warning regarding the shotgun brought a hesitation about approaching it, and certainly there would have been no thought of ever touching it, even though to have picked it up would have brought no danger, live cartridges were stored beyond the reach of inquisitive hands. Dead cartridges might sometimes have been found when walking the fields after someone had crossed in pursuit of game. Orange or blue, brass caps with the smell of cordite, there was a strange sense of wonder in handling a cartridge, to imagine that something so inconsequential could have such a devastating impact.

Never was there ever a suggestion that a gun might be used to defend oneself against a threat from another person, although there must always have been an awareness of that possibility; the Western films that occupied much of the air time frequently depicted cowboys firing shotguns. Yet the shotgun always brought a sense of security, perhaps it derived from those childhood memories. Perhaps, like Gabriel Oak, it was something for which one might instinctively reach, in imagination, if not in fact. 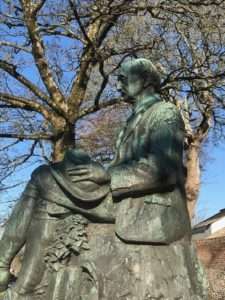