Going on a trip with Sid

The mood of summer still lingers: deep blue skies and bright sunshine. We went to Watchet, where we had lunch in a cafe that served the sort of food that you might decide to have at home, and then to Minehead, where we walked the length of the seafront. Butlin’s was buzzing with people there for a music weekend and the coffee shop to which we went for hot chocolate was full of people of a certain age. Driving back, on the edge of Taunton, I spotted the pub where we used to stop with Sid

Sid used to organize the outings in our village, where there was no public transport. Sid never learned to drive, relying on a workmate for the daily journey to the shoe factory in which they worked. Perhaps it was the lack of a car that prompted him to organize the outings, although if that was the whole explanation he might just have planned trips for his own family; perhaps he was an innately sociable person. Sid organized day trips to West Country destinations. The thought only occurred years later that, to fill a bus, there must have been a few dozen people who joined him, a not inconsiderable proportion of a small rural community.

The outings were usually to seaside towns, places where you could hire a deck chair for the day to sit on the promenade, or on the beach; places where shops were filled with things one would never find in local shops; places where cafes, like the one in Watchet today, served fish and chips with peas, provided strong tea in aluminium pots, and bread and butter on side plates. They were outings where people boarded the bus in the morning with greetings and laughter and left the bus at the end of the day tired and contented.

Memories linger of a trip to Exmoor or Minehead or North Devon, somewhere west of Taunton, anyway, where the bus stopped at a pub on the return journey and where a fourteen year old boy was allowed a glass of shandy. The pub, I am now certain, was the Cross Keys.

Such outings seem to have been a well established part of local culture. My mother recalls the post-war years when my grandfather, a small farmer, could never have afforded a family holiday, but would book excursions with Sandford’s Coaches and he and my grandmother and the family of seven would go off for the day. Riding on the buses and travelling on the roads of Somerset in those times, the journeys would hardly have been to distant places, but, sixty odd years later, they are remembered with affection.

If someone like Sid put up a notice today that there would be a coach outing to the seaside, how many signatures would there be? A handful? None at all? Who would want to travel by coach to a seaside town when a car journey would be so much simpler? Yet there was something about Sid’s outings that has been mostly lost in our times, that community bond, that sense of enjoyment of something to be shared, that sense of equality and common purpose that only a bus journey can bring. It’s that stuff about gaining the world and losing your soul, but that’s now mostly as old fashioned as the coaches that carried us to the seaside. 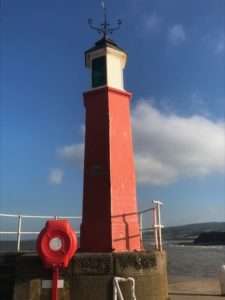